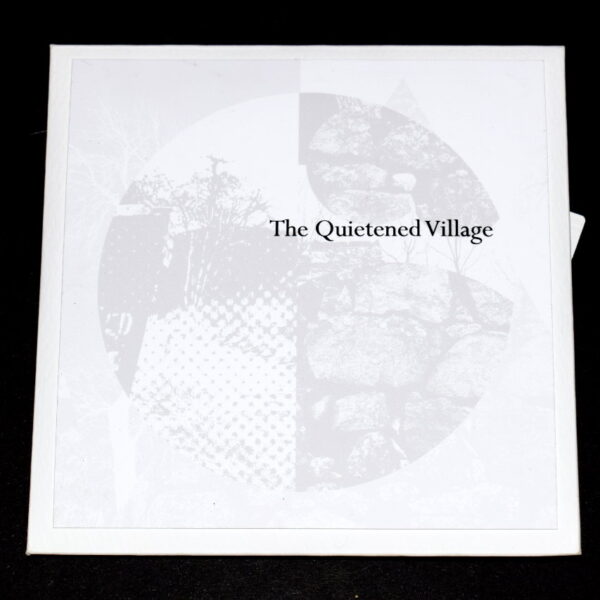 English pastoral moods, themes, and whimsy on The Quietened Village: Dawn Edition (AUDIOLOGICAL TRANSMISSIONS ARTIFACT #2), an 11-track compilation of contemporary artistes from the micro-label A Year In The Country. They present the work in two different editions, a Night edition and a Dawn edition, but the audio content is the same, just the packaging varies (the Night edition arrives in a box). Everything is hand-made, textured papers are favoured, and little chunks of ephemera including a small badge and a stringed tag are attached. I like the care and attention in the packaging, which is described in extensive detail on the label website, but I find the actual imagery is severely impoverished; the cover, which looks like it might have started life as a nice bit of photo-collage work, is printed in such a light grey that it seems to be fading away before our eyes.

This is probably the whole point, however. The project is setting out to produce a “reflection” on lost villages of England. We are invited to muse upon matters of coastal erosion (village has fallen into the sea), villages no longer featured on maps, or cases where populations are evicted and when they come back it’s all changed. As to that last one, the paragraph that describes it is clearly referring to Imber, yet doesn’t name it explicitly, resorting instead to flowery phrases like “great conflicts between nations”. Imber was indeed evacuated during the second World War and never recovered from its careless treatment at the hands of the MOD; another record, oddly enough made by the Norwegian guitar duo kÖök, covered similar ground, and is noted here. They drew very pessimistic conclusions.

This vagueness (I suppose they would prefer to call it “allusiveness”) on the part of A Year In The Country is evidenced throughout the album. Only two tracks here actually dare to name an abandoned village; there’s ‘The Drowning Of Mardale Green’, referring to a place in the Lake District that was submerged underwater due to a reservoir blunder by Manchester Corporation; and ‘Lost Villages of Holderness’, referring to parts of the East Riding in Yorkshire that were lost to erosion. I discount David Colohan’s reference to the Mitta Mitta, as this is a small town in Australia, and doesn’t seem to fit the overall theme of Englishness. Evidently, the music on The Quietened Village prefers to evoke, rather than to deal with specifics of geography or history; and likes to mix reality with imagination, fictions and myths, as demonstrated by the press release with its reference to The Midwich Cuckoos, and “dystopic tales told and transmitted in times gone by” – a sentence which, while lyrical, would not have earned its author a pass mark in CSE History.

The music itself, mostly instrumental, is pleasant enough. If the musicians share any common ground, I’d say it’s that they are trying to trigger memories and associations in the listener, and doing so mostly by pastiche and quotation. In this, they are not far apart from their nearest rival, the well-established Ghost Box label with its loving recreations of a fictional England refracted through memories of incidental music on BBC television emerging in some undefined period between the Suez crisis and the joining of the European common market. Two cuts which to my ears most closely resemble the Ghost Box “style” (admittedly a very broad church) are ‘Playground Ritual’ by Polypores, and ‘47 Days And Fathoms Deep’ by A Year In The Country. The latter is a pleasant folk-y tune presented with slightly treated sounds, and it fades away sadly into the sound effect of the blowing winds. to illustrate the passing of a lost village. The former has a clunky synth tune acting in quite an agitated manner, with richly evocative sounds; I like its slightly dark undercurrent, the vague creeping noise approaching, which may be taken to stand for encroaching modernity threatening the old ways.

From here it’s a stone-throw to some good old Radiophonic Workshop quotes; our good friends Howlround have made a career from quoting BBC music in clever and well-informed ways, and their ‘Flying Over a Glassed Wedge’ does not disappoint, reminding us of incidental music for Dr Who episodes that never existed. ‘Day Blink’ by Time Attendant, is likewise of a sci-fi bent, using distortion and unusual synth sounds punctuated by random beats. Time Attendant is a great name, but sadly time-keeping is not in their skill-set. Like much of the work on this compilation, it’s an attractive but poorly-composed piece, lacking form or direction or a satisfactory conclusion. Cosmic Neighbourhood’s ‘Bunk Beds’ is likewise littered with quirky electronic sounds, in a nonsensical confection that ends the comp on a note of whimsical fun.

The Rowan Amber Mill have made more of an effort to compose and arrange music; their ‘Separations’ reminds me of a Dolly Collins arrangement from Love Death and The Lady, lean and spare, and given the context that’s not a bad association to have. 1 The Soulless Party have their ‘Damnatorum’, a pleasing tune rendered in a sort of minimal romantic classical style. Only the synthetic string keyboards let this one down slightly. ‘Damnatorum’ is a strong title too, and let’s not forget the film made of The Midwich Cuckoos was called Village of the Damned. Another track with classical leanings is Richard Moult’s ‘Quopeveil’, where the piano and oboe produce a very tasty and unusual combination, even if the melody is very uncertain and comes out haltingly. It feels a bit precious, strained; as if striving to be mistaken for a British Light Music classic.

David Colohan’s ‘At the Confluence of the Mitta Mitta & Murray’ relies almost entirely on a “nostalgic” ambient drone to achieve its effects; it’s in the same general area as Sproatly Smith and their ‘Lost Villages of Holderness’, a piece which makes extensive use of sound effects such as ocean waves, seagulls, wind, etc. It feels a bit glib, but the juxtaposition of these recordings with the nostalgic music works well. The second half of the piece shifts dramatically to a “modern” folk song, sung in a charmless style.

For other musicians who have tried to capture the charms of the United Kingdom’s imaginary past, see Hidden Rivers (i.e. Huw Roberts) who idealised the Welsh countryside on Where Moss Grows; Nigel Samways, at a stretch, with his Nuclear Beach and Temple of the Swine; and Jon Brooks, with his 52 for the label Clay Pipe Music. From 6th April 2016.