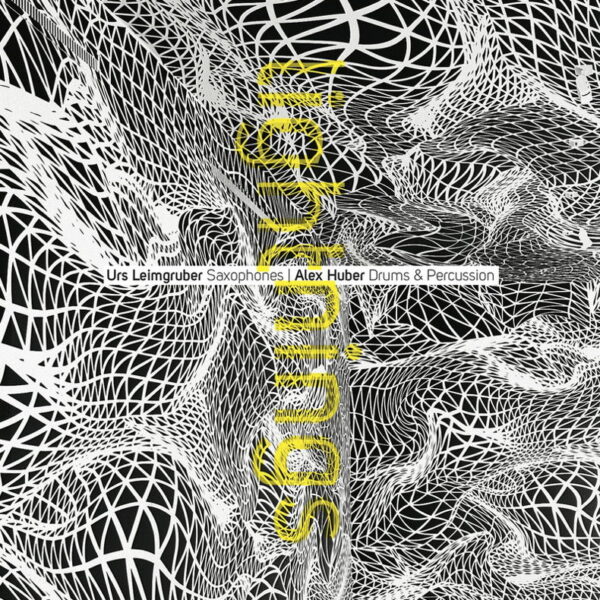 This is probably a pretty exciting live recording for fans of saxophone and drums duos, which its press release posits as “A journey through natural tones and tribal music, mixed with free jazz…”. Off-kilter atmospheres hint at deviant electronics initially on the first piece “Swift” briefly, but then the free jazz hits you pretty much immediately with terminal force. As far as “tribal music” goes though, having listened to this album a lot over the past few weeks, I’m not sure I got that memo. Not that it’s important.

Swiss saxophonist Urs Leimgruber has been active since 1983. He has recorded with many others including notable Brits Evan Parker on their 2010 duo long player, Twine, and with Roger Turner on 2012’s The Pancake Tour. Alex Huber is responsible for drums and percussion on Lightnings and is somewhat of a polymath as far as I can ascertain; as well as recording, producing, mixing and mastering this release himself, he also happens to be the co-founder of Wide Ear Records, and is a committee member of WIM Zurich; an organisation which provides a “working space” in the city for improvising musicians. Huber has had the privilege of performing with musicians such as Tristan Honsinger, Achim Kaufmann, Tobias Delius, Matthias Schubert and Christian Weber.

All the pieces presented here have a melodic component; some more than others. “Swift”, “Shaped” and “Resistant” all showcase’s Urs Leimgruber’s hard blowing style while “Resistant” and “Struck” get more into an eastern vibe possibly referencing John Coltrane or Pharoah Sanders’ more “spiritual” output. You might see this as a parallel to the UK’s Nat Birchall perhaps, with split tone techniques from Leimgruber, piles of agitated percussion and beaters in place of sticks in Alex Huber’s hands. Birchall’s work is more faithful to the concept; Leimgruber and Huber may have the chops, but I don’t think they feel the music in quite the same way. Their approach on “Struck” is more abstract than “Resistant”; there’s less of the emotionally overblown sax; in fact it sounds like the saxophone is allowed to influence Hubers’ pile of percussion in an interesting way around four minutes in. When “Resistant” ends, it is with a melodic flourish rather than the resolved exploration promised by its beginning. Great as this sounds, after these casual nods to the type of sound-making that is more often found in EAI, by the end Leimgruber has predictably resorted back to a melodic approach and the album as a whole ends just as it began.

Overall, the sound and mood of Lightnings is fairly dry and I might even go as far as to speculate whether Huber’s almost total technical involvement was a good idea. I understand how easily one can become emotionally attached to a project, but sometimes, more than one pair of ears is helpful. Certainly, it is possible for a work to suffer under the stresses of control-freakery or egotism if one person is allowed to dominate too much. I’m not necessarily saying that this is the case here, but I wonder if a third party had been sought for the mastering job at least, the result might have sounded that bit tighter and more powerful.