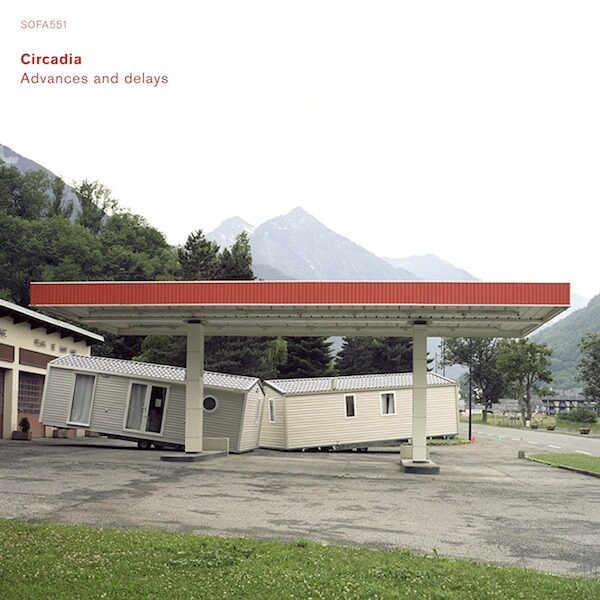 It’s that man again. Here’s Tony Buck, muscle behind The Necks and stalwart of many musical activities reviewed by The Sound Projector, in a new group with heavy improvising friends David Stackenäs and Kim Myhr (six and twelve string guitars) and Joe Williamson on bass. Buck, of course, provides the Circadian rhythms.

This is a curious artefact in some ways. Just two, longish tracks, although compared to the aeonic timescales favoured by Buck’s other band, these zip by like early Wire singles. The music was recorded live in concert at Fylkingen, Stockholm. Not that there’s anything on there to suggest the presence of an audience, at least not to my ears.

Indeed, the overall feel is quite hermetic and inward-looking, as if the group are trying to hide themselves away inside their own sound world. The first track, ‘The Animal Enters And Traverses The Light’, starts off with agitated guitar pickings, rubbings and harmonic chimes, gradually building in intensity over a framework of ringing percussion, bass daubs and firmer strums before fading back into the ether from which it came. It’s free-floating and airy and yet somehow impenetrable, like a cloud of ectoplasm in a darkened séance parlour.

Track two, ‘The Human Volunteers Were Kept In Isolation’, starts off in more tranquil and relatively melodic fashion, with an uneasy edge, as befits the rather chilling track title. The acoustic guitars carefully pick their way through a hushed and haunted labyrinth of chimes and tones, becoming more agitated and frantic before fading out once again to silence.

As the old song says, that’s all there is, there ain’t no more. It’s as if we’ve been eavesdropping on something hidden and private. Perhaps that second track title is the clue, and the human volunteers were taking part in an experiment to see what happens when you keep top-notch improvising musicians in isolation.

Still, opaque it may be, but it’s never less than interesting, as you would hope from musicians of this calibre. If Circadia go on to record more material together, it would certainly be worth seeking out.