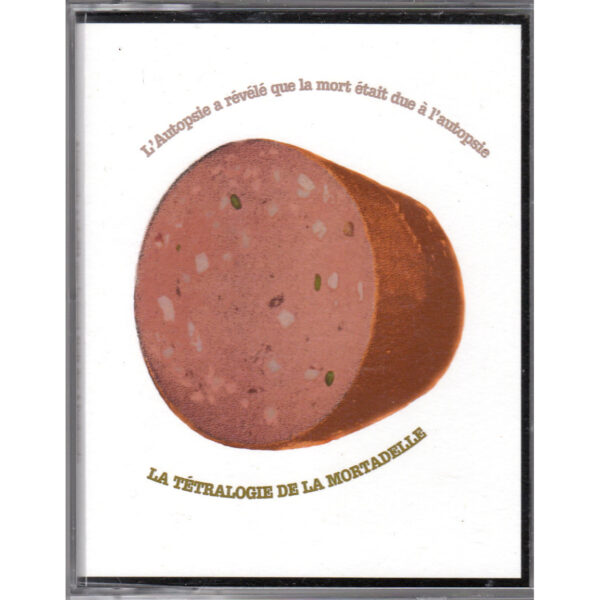 Got a double-cassette pack from L’Autopsie A Révélé Que La Mort Était Due A L’Autopsie, which arrived here 19th April 2016…we first heard from this strange outlying project in November 2014 when they sent us a very bizarre album called Le Souffle de L’Avorton and we learned, whether we wanted to know or not, that the membership comprised Ogrob, aka_bondage, Anla Courtis and Frank de Quengo. Courtis and aka_bondage did the editing and mixing of the present release, and aka_bondage provided the artwork. As you can see, it’s an image of a Mortadelle sausage, and the album is titled La Tétralogie de La Mortadelle (KOMMA NULL KN11). I have never eaten this particular Italian delicacy, as I suspect that the inclusion of berries and pistachio nuts (little red and green bits) in the mix of cured pork and pork fat make for an unappetising combination. You might say the same about this loopy music, but we’ll get to that.

The release is clearly another send-up of “serious” music. The last album spun a yarn about the life and work of Jean-Philippe Borbollono, a composer who never actually existed, but the band put a lot of effort into creating a convincing hoax. This piece uses the term “Tétralogie” in mock-solemn tones, although technically it is indeed a tétralogie because it’s composed and presented in four separate parts, over the four sides of the two tapes. They pretend it was made at “Groupe de Recherche Mortadelique de Dammartin”, thus poking fun at the “real” Groupe de Recherches Musicales, though this kind of in-joke isn’t much of a knee-slapper unless you’re already a devotee of Pierre Schaeffer and all his works. They also claim to have realised the music using a Toshiba GT-840S, which is a genuine reel-to-reel tape recorder from the mid-1960s, but that might be wishful thinking on their part (such devices are quite rare). Lastly there’s the absurd image of the sausage, which might be read as a snide comment on electro-acoustic music “grinding” its sources into mincemeat, but I’m probably over-thinking it. There’s no quicker way to get a grand bouffe from your audience than using the image of a big sausage.

It’s hard to keep my mind off food for some reason…but the music here is mostly indigestible, a greasy stew of thoroughly unpleasant turgid sounds. It’s slow, disjointed, and makes no sense; in places, it stands on the cusp of being comical. This group, Ogrob in particular (just check out any of his solo works, like the recent microphones-in-the-vaginas album), have an uncanny knack for producing a strain of glorpy, muddy sound that resembles a stomach-ache. Or induces one, if there’s an aural equivalent for that condition. Admittedly, the surface does resemble “old school” musique concrète in some ways, possessing that kind of “muffled” and slightly hissy sound you get on 1950s recordings, which may be a patina that L’Autopsie have lovingly tried to recreate on this release. However, it’s clear they are not at all interested in normal tape composition methods nor conventional aesthetic pursuits, and that’s putting it mildly…vague, meaningless murmurs are the order of the day, deliberately voided of meaning or association. Playing it back becomes an endurance test; it’s up to the listener if you choose to bring anything to this picnic of the Damned. You’ll need a fair degree of inner resource, or you’ll go hungry.

This isn’t to suggest La Tétralogie de La Mortadelle is just an elaborate leg-pull. I have no doubt that the creators involved have a serious point to make, and none of them are talentless frauds. They’ve been doing this project for eight years now. But somewhere I suspect they may have reached a point where the idea of an artistic compact (for instance, the creator attempts to transmit meaning to a receptive audience) has broken down completely for them, and they see no point in attempting to repair it. Thus we end up with muddy, disjunctive noise, which pokes fun at anyone foolish enough to take music seriously.