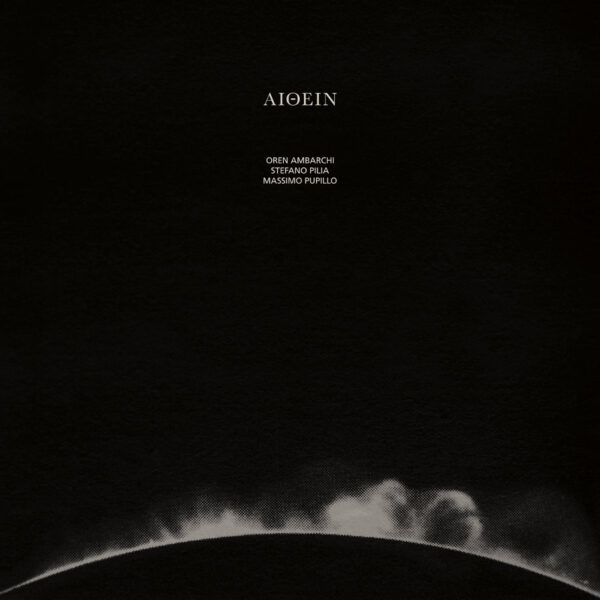 Aithein (KARL RECORDS KR023) is a fine record of guitar art-rock excess played by Oren Ambarchi with two Italian musicians joining in, namely Stefano Pilia and Massimo Pupillo. I see we noted guitarist Stefano Pilia in 2005 with his album for Last Visible Dog, Healing Memories… And Other Scattering Times, realised with the help of Valerio Tricoli. “Long-form instrumental…shapeless drones”, was how I recall it, but there was also warmth and sincerity to his work, plus he seems to have improved his technique considerably in 11 years, and his guitar work makes a good complement to Oren’s playing here. Pilio has also made some headway playing and touring with Andrea Belfi and David Grubbs in another art-music trio. Massimo Pupillo is the bass player in Zu, an Italian trio who blended jazz moves with math-rock in some way, and I don’t think we heard them since 2005 either, and the album The Way Of The Animal Powers on Public Guilt. Well, so much for the good old days.

Oren Ambarchi has over time been growing and developing his unique approach to playing extended instrumentals, a trend which could be seen on 2012’s Audience Of One and Sagittarian Domain from 2013. I’m not sure what it means, or how to characterise it. I can’t give it a name. It feels quite composed, because it’s structured to some degree; it allows for improvisation, like jazz; and yet there’s always a strong beat in it somewhere, so it never departs very far from rock music. You could say Oren is trying to have his triple-layer cake and eat it, with extra helpings of cream and sugar. Maybe it also reflects on his wide-ranging musical appetites; we all like so many types of music now, mainly because there’s so much of it available. But I’d like to think Oren is not only doing something quite original, he’s taking his time to evolve it thoroughly, and naturally; it’s a learning process, other collaborators are involved (even though he can produce similar results in a studio by playing all the instruments himself), and it’s not some novelty act or a flash in the pan that’s built on sand (insert other dreary cliché of your choice here; I’m looking for trite, commonplace phrases that suggest transience or impermanence).

However you might wonder what on earth I’m getting so excited about when you hear Aithein, captured at a live gig in Bologna in 2015 and comprising two long instrumentals. After all, the first half is mostly so desolate and empty that you lose the will to live as you listen, especially when you survey the grey empty skies and consider the awful future that awaits us all. And is your life enriched by the livelier antics on the second side, which if you sampled for just two minutes you’d say was nothing special, indistinguishable from any given Hawkwind “jam” of 1973 surviving from a Festival bootleg tape? (Incidentally I think that’s Oren drumming at the end of the record, and he ain’t no slouch behind the old tubs.) Well, Oren’s achievement I think has been to structure the whole piece over some 33 minutes, so that there’s a discernible trajectory from its sorrowful start and its cathartic release at the end; along the way, there are numerous changes in tone, mood, timbre and effect, where the subtleties of the guitar drones are far more varied and powerful than anything Sunn O))) (with whom he has played) have ever managed, riff in slow motion as they may. Aithein’s dynamics and developments never feel forced or strained; it’s a combination of good ideas, compositional / directional strengths, and good musicianship that leads to such a good result. From 19 April 2016.