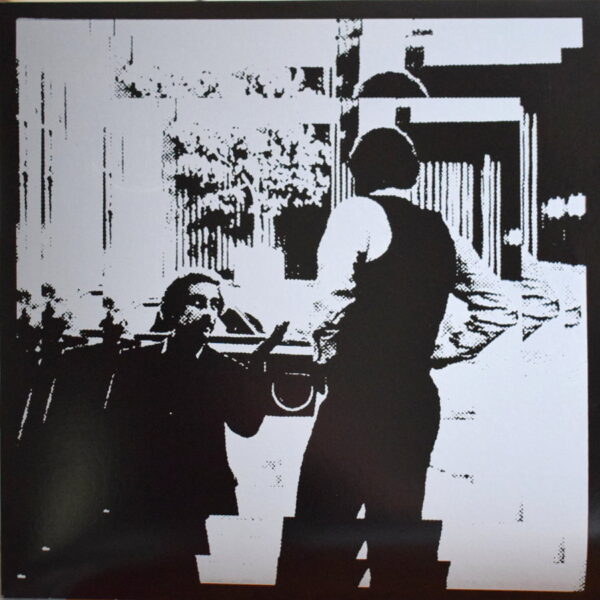 Ted Lee is co-owner of the Feeding Tube Records label in New England, that part of the United States generally associated with a resurgence in underground noise, free rock jamming and freaky-folk of all stripes over the years…as regards his own musical contributions to culture, we were less than impressed by the Zebu! record in 2014, tho’ had more time for the scrambled gibberish of the Curse Purse record in 2015 where he appeared as one part of a trio. Seems he’s also performed with Egg, Eggs (though one cynical riposte there might be “who hasn’t?!”) and Sunburned Hand Of The Man. Now Ted Lee has made a solo record, and a fine statement of mystifying art-drone-noise shoutery it do be. Appearing here as No Sod, Lee has seen fit to press his record in blue vinyl, manufacture only 100 copies of it, and call it 1:11 / 11:11 (FTR 223), a mystical numerical equation that may mean he’s inviting us to find parallels with Alan Sondheim’s Ritual-All-7-70, or not…it’s something to do with ratios…he’s also included a monochrome printed booklet of baffling artwork daubs, some of them resembling human heads, most of them distorted and stretched in the computer in some way…so far, a lot of “artiness” abounding.

I enjoyed what’s in the grooves, though. Each side equally abstract and puzzling, but packed with dense noise, drone, and feedback…the first side opens with some beautifully delicate chords, which is a way of ushering us into the main event…said main event being a protracted bout of free drumming and semi-crazed vocal yawping, an entity writhing like a trapped fish in the sea of humming noise and distortion…it’s a much more successful bid at what I always expected Sunburned Hand Of The Man to deliver, but they never did. As No Sod, Ted Lee has evidently decided that the best art music is primitive, inexplicable, and utterly spontaneous. Don’t look for hidden messages in this primal goop, but enjoy the warm, blood-filled presence while it still throbs and vibrates your torso…if we’re still dropping ESP-Disk references, maybe the Cromagnon or Mij LPs would align themselves at this juncture too.

The B side feels kinda more refined after that caveman gorge-fest of fire, blood, and bones, emitting a strange multi-layered chilling drone for some 15-20 minutes that feels like a glimpse of infinity, or least a view round the immediate upcoming corner. Somehow it manages to evoke very mixed emotions, of simultaneous dread and happiness, without really doing much to vary its general continuum. While not as roary as its flip side, this No Sod endorsed drone is nowhere near the over-processed, polite and synthetic drones that tend to emanate from mainland Europe and the million and one laptops that pass for musical instruments in these grim times. Instead, it’s as rough-hewn and cranky as a Claes Oldenburg slab of painted plaster, or a Rauschenberg canvas packed with found images and detritus. Good stuff. I always wondered why Alvaro kept on mentioning Ted Lee and his ever-present bottle of maple syrup, and now I know. From February 2016.