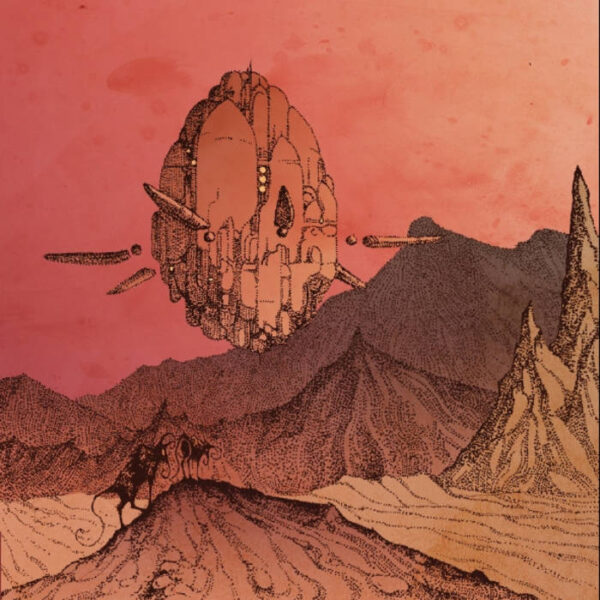 Flush from reviewing their most recent album “Future Echo Returns”, I decided to back-track through Slomatics’ past recordings to see what other juicy low-hanging fruit the Belfast blasters had on offer and stopped by “Estron”. Originally available in vinyl format as a limited edition release by Head of Crom Records in 2014, this album presents the trio as a Melvins-style sludge doom metal band, no more and no less, with experimental and psychedelic tendencies. Now “Estron” may be the band’s fourth release but it’s also its first with vocalist / drummer Marty Harvey so listeners can expect a second beginning for Slomatics here. If you’re not familiar with Slomatics but want an entry into the band’s work, you can start with this album and either go forwards or back into the guys’ back catalogue.

The album starts strongly with two tracks: first up is “Troglorite”, featuring a high-pitched wailing vocal (it’s a bit reedy to be honest), solid booming guitars and lots of crashing cymbals and sturdy solid drumming; then the band swings straight into the next song “Tunnel Dragger” without pause for rest, at least until halfway through where the music breaks off for a short space-ambient interlude of synthesiser-theremin interplay. This is the first indication that the band is dipping into space psychedelic territory and it fits in well with the musicians’ bludgeoning tactics.The band continues with the sludge doom punishment and the futuristic sci-fi themes with tracks like “Futurian” and “Lost Punisher” – at least the songs on the first half of the album are fairly short for music of this genre and don’t overstay their head-bashing welcome. While the musicians don’t depart much from the template set with “Troglorite”, the music moves fast and there’s enough variety in the melodies and riffs that listeners are rarely bored. You’d think that the thin vocals, far back in the mix, might be fighting hard to be heard but the production (courtesy of James Plotkin, without whose studio engineering abilities entire music industries simply would grind to a halt) is clean enough that the singing is clear and not too shouty.

Songs in the album’s second half are more varied – they start to feature lead guitar solos – and apart from one short instrumental are much longer than earlier songs. “And Yet It Moves” is a sinister, oily track, very unsettling and nauseous, and with a very claustrophobic feel as the heavy riffs close in on your ears and head. In its later moments it becomes lethargic and sluggish as the very alien atmosphere surrounding it infiltrates your senses through those hellish liquid metal lead guitar licks. The very brief, all space-ambient “Red Dawn” provides a bit of light delicate rest and relief before the band launches into the 10-minute “The Carpenter” whose title I sometimes wonder might be a reference to the film director John Carpenter who made a number of sci-fi / horror films in the 1970s and 80s that are now regarded as cult classics. This last track plays like a mini-soundtrack to an imaginary sci-fi / horror short and shows a side of Slomatics that until now has rarely been glimpsed: an ability to weld atmosphere, mood and music into a definite drama, where death-dealing doom sludge and space-ambient electronics combine into a monster that commands your attention and compels you to follow it to the very bitter end.

As a whole work and as a set of songs, the album demonstrates a high level of thought and care that went into its creation. There is a real sense of listeners being softened up in the album’s first half for its later, more atmospheric and complex tracks. All songs are well crafted and there’s hardly any filler in any of them. Slomatics don’t just hammer away with huge chunks of doom riffing for the sheer hell of it (though you do sense they love punishing their fans) but whatever they do, it’s always with intent and knowledge of the effects left behind. The result is a very satisfying work of art that’s as much fun to hear as it must have been fun for Slomatics to create and record.