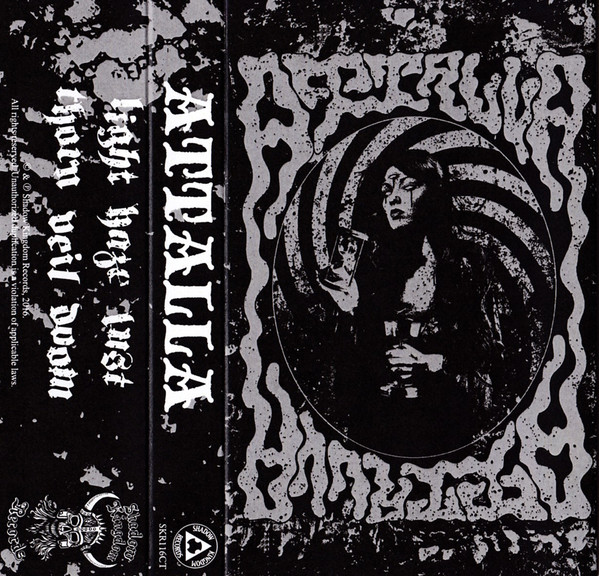 After two years existing only as an independent self-release on vinyl, Attalla’s self-titled first album is finally available in CD, cassette and digital format through Shadow Kingdom Records. The band’s fans may well be asking what took so long for a label to finally notice Attalla, and after hearing the album myself I’m asking the same question too. With one foot deep in punk and hardcore and the other foot in Black Sabbath / retro-1970s hard rock territory, this recording blisters with power, steel and aggression.

The album isn’t long and the songs don’t go much beyond five minutes each with maybe one exception. The one-word song titles are very cryptic and might describe stages of being during a drug trip – or a trip through this album if heard loudly enough that listeners are all but engulfed in the music. The music is hard-hitting with chunky, crunchy riffs and punching skins work that could chop through several wooden boards at once. Much of the music is instrumental with great oily and sinister lead guitar melodies unfurling and undulating over the growling, booming bass drones and stuttery drums. An early highlight is the mostly instrumental “Haze” which appropriately befuddles the mind with riffs and rhythms that crush all resistance and lead guitar that’s truly on fire. Attalla (the band) leave no time for us travellers to recover before launching into the even heavier “Lust” and the Sabbath-influenced doomster “Thorn” which features some really sinuous riffing. “Veil” starts as a straight-out rock’n’roller which can be a little jarring after the previous two monster-truck tracks but once it finds its true sludge doom identity, it settles down and coasts steadily along.

The only major problem I have with this album, and which I think most other listeners will agree with, is that lead vocalist Cody Stieg can be a bit lost in this massive monstrous music with his high-pitched shouty singing. Since most normal human singers will have trouble competing with the music anyway, I’d suggest a vocal style that’s more spoken or chanted than sung, and given a moment or two to shine on its own, a cappella style, on future work should the band wish to continue the same way as on “Attalla”. Listen to a track like “Thorn” where Stieg has a lot to get off his chest and you can hear he’s really straining at the high end of his vocal range. Apart from the singing, I can’t find much to fault with the music though perhaps on some songs the drumming sounds more tinny and clacky than it should.

On the whole “Attalla” is a solid effort with lots of catchy hooks, the phattest of phat riffs and more bass-heavy crusherama than a concrete building waiting to be hit by a wrecking ball. Every song sounds just about right for its length, neither too short nor too long though some listeners might wish that “Haze” and “Thorn” were a bit (or even a lot!) longer. Short though it is, this album is a very satisfying crunchy breakfast introduction to a band who we should all hope will have a long and successful future with its fusion of retro hard rock and doom with a hardcore edge.