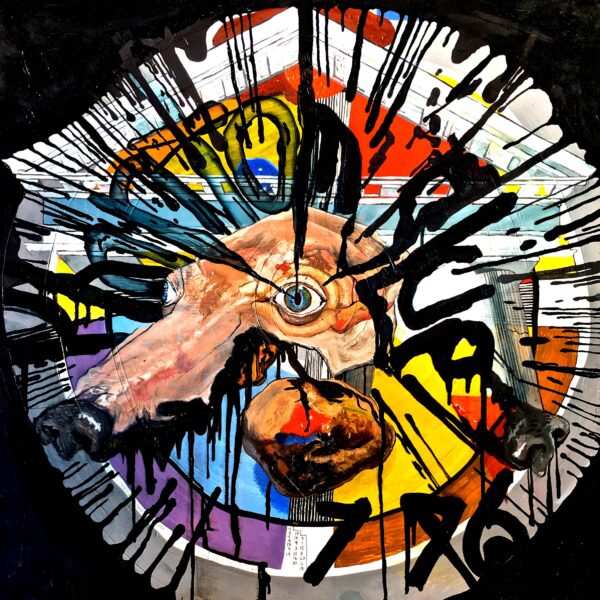 Being a typical dumb Australian, I thought “776” might have been a reference to when the Ancient Greek Olympic Games were first held. Heh-heh, is that ever a weird guess!!! Truth though is stranger than the imagination: “776” is a metonym for US band Phantom Glue’s re-imagining of the United States as having existed for over a thousand years in an alternative though parallel universe, a United States where the Declaration of Independence had not yet been signed. Appropriately the album “776” is a mix of the mythical and mystical, and the uncompromising and hard-hitting, perhaps as much a commentary on the current nation as it is an exploration of a fantasy alternative.

Opening track “Ion Cloud” and follow-up “Hundred Hand” capture both sides of the album’s concept, at once screeching hardcore, sludge, doom and psychedelic, with the music bordering on overwhelming and monstrous in parts. The vocal seems as much disembodied as distant – the Phantom Glue singer doesn’t even try to compete with the full-on bludgeon attack – as if it really is a messenger from the parallel universe of 776 come to warn us of doom. Once PG have our full attention and concentration, the band dives further into its alternate reality with “Somatic”, a slower, more sludge juggernaut track with thundering percussion, steely rhythm guitars and a squalling lead guitar snaking around the edges of the song. So concrete-crunching is this song that it’s easy to forget that it’s only five minutes long. “Somatic” pairs well with “A Worker-less Mill”, an equally monumental song and staggering in its structuring where the thumping drums take centre stage building up a tower of thudding beats. Guitars stutter or howl around the percussion and the vocals almost shrink to raspy screams. The song is crowned with a corrosive acid ambience that burns and etches deeper-than-deep holes in your consciousness.

The pile-driving psychedelia punishment continues all the way to the end; the band seems to lose a bit of momentum with “Suttungr” which starts off slowly and lethargically but recovers energy and speeds up in its second half. “Hocheim’s War” is a definite head-banging grooving rocker with as much noisy hardcore crispness and crunch as creepy acid-bleached lead guitar flurry. Closing track “Gog is Dead” is the most atmospheric song, though not necessarily in a benign way: the doom is dark, sinister and haunted-house menacing. The song builds up in overpowering intensity and immersive blackness that literally leave folks hanging on the edge of a cliff descending into a bottomless abyss.

This music is so huge, monstrous and at times terrifying that listeners might well be glad it doesn’t last long (it’s about 36 minutes in length) and the more sensitive among you might need another 36 minutes to get the band’s music and terrifying dystopian visions out of your heads. I’m almost grateful that the production on this album is less than what the music deserves – the music (especially the drumming) does have a tinny sort of sound and doesn’t feel as three-dimensional solid as it should – or I might have been sent deranged. This is one album to be heard at least once, if only so you can tell your friends you survived the experience – but just barely. Definitely an experience not to be passed up!