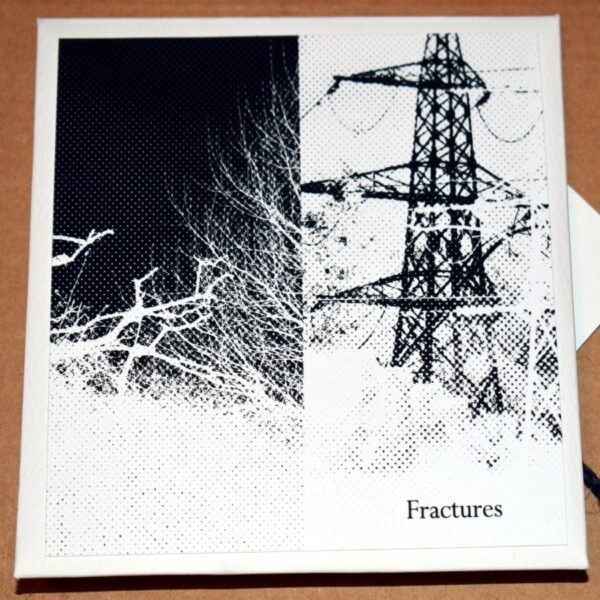 Recently we noted The Quietened Village from the English micro-label A Year In The Country (AYITC), a compilation which limned allusive portraits of English pastoral idylls. Here is the same label with another not-unrelated compilation called Fractures, which they dub #3 in a “series of explorations” called Audiological Transmission Artifact. Once again there’s a concept at work; the compilers propose that the year 1973 was a pivotal year for the UK, where a “schism in the fabric of things took place”. The manifestations of this change are reflected in the following list: power cuts, the three day week, the release of the film The Wicker Man, the making of the children’s sci-fi TV series The Changes, and other scattered references. I suppose the main disaster for AYITC was the departure of Delia Derbyshire from the BBC Radiophonic Workshop. There are also references to faded psychedelia and corrupted ideals, but the level of engagement with 20th century history hasn’t gone much beyond reading a few headlines and rummaging in a very eclectic shopping bag of cultural effluvia, mostly derived from watching the telly.

I’m all in favour of this kind of alternative history, even if the concept feels a little undeveloped in this instance, and whatever substance it has is mostly reflected in the press release rather than in the actual music on offer. At least on The Quietened Village, some of the musicians were making an attempt to reference real English villages in their sounds, titles, and field recordings; on Fractures, the music’s relation to the central concept is less easy to discern, other than a vague feeling of disquiet and paranoia in some cases. There’s a lack of specificity which troubles me a little. However, Fractures works well as an entertaining spin on its own terms. My favourite pieces include ‘The Osmic Projectors / Vapors Of Valtorr’ credited to two separate projects, where the vaguely sinister purr and spangly electronica of Circle gives way to a deliciously haunting melody concocted by Temple. I also enjoyed Time Attendant and their ‘Elastic Reform’, which like most of the stuff here lacks a real tune, but at least uses repetition quite effectively. It goes on for a long time and insists on itself to the point of creating a nice mysterious ambiance.

Semi-supernatural suggestiveness is to be had from Keith Seatman on ‘Seeing The Invisible’; the sounds are interesting, but the construction is weak. It feels like someone is attempting to summon spirits; buried children’s voices emanate from the quasi-supernatural murk. Polypores are attempting something slightly similar on ‘The Perfect Place For An Accident’; eerie voices are mixed together with off-kiltre keyboard murk, and the technique is like an attempt to conceal a murder mystery where voices of the innocent continue to haunt the guilty. Neither of these are genuinely horrifying though, and feel more like the pale ghosts of certain Central Office of Information films. With their extremely fragile narrative elements, these might be tunes we could match up against the hoped-for associations with BBC TV of the 1970s. Slightly more explicit in making such references are Listening Center 1 with ‘Triangular Shift’, a piece which begins with outer-space suggestions of missiles and satellites at play, and then leads into a jaunty Schools & Colleges type-tune.

With all of these Radiophonic Workshop clues floating about, I’m a tad disappointed that none of the creators make much of an effort to emulate their heroes; I mean that I can find no evidence they have studied the techniques or methods of these highly original and inventive creators who worked in such a physical way with tape construction and sound mixing, and instead are content simply to imitate their surface sounds. In some cases, not even doing that very convincingly. But it’s harsh to level this charge at the creators here, as I refer to a name-checking syndrome that’s been afoot in the UK for many years now. Likewise, I don’t quite get the fixation that everyone continues to apply to The Wicker Man, often to the exclusion of any other English horror movie made in the 1970s. It’s a form of tunnel vision to single out this very unusual movie, and often so many of its adherents seem to lack the contextual understanding of film theory or cinematic history that might help us to see it in perspective.

At any rate, those who delight in the pagan elements of The Wicker Man are bound to find interest in the tracks here by Sproatly Smith and The Hare And The Moon with Michael Begg. Sproatly Smith’s ‘In The Land Of Green Ginger’ is trying very hard to be romantic, English, and pagan in a way that would attract the approval of Julian Cope and his acolytes. I do like the combination of traditional folk-song elements with the doodly electronic interventions, but the tune lacks melodic strength and is badly sung. ‘A Fracture In The Forest’ by The Hare And The Moon appeals to me even less, with its solemn recits about about lifting the veil and catching sight of the God Pan. But it plugs into a continuum of dark Industrial folk music that has its supporters, a strand which I suppose has its beginnings with David Tibet, who has appeared on at least one Human Greed record recorded by Begg. To some extent, The Rowan Amber Mill are also perhaps aiming for a folky vibe on their ‘Ratio (Sequence)’, with its vaguely pastoral melody mixed with modern electronica.

The comp ends on a very downbeat note. A Year In The Country offer us ‘A Candle For Christmas’, a very sombre construction which I enjoyed. It seems to exist in parallel with a wholly unrelated musical sub-genre, that of Cold Depressive Black Metal; but for all their pessimism A Year In The Country never succumb to that sense of complete futility we associate with the latter. Their non-specific valedictory hymn is entirely unique to the label aesthetic, and to this compilation. I’m slightly less taken with David Colohan’s ‘Eldfell’, which amounts to a generic atmospheric drone with wailing voices. It ain’t exactly Popol Vuh, but the unassuming tone and mock grandeur is unmistakeably English. Fractures exists in two editions, of which I received the Dawn Edition on 22 April 2016.