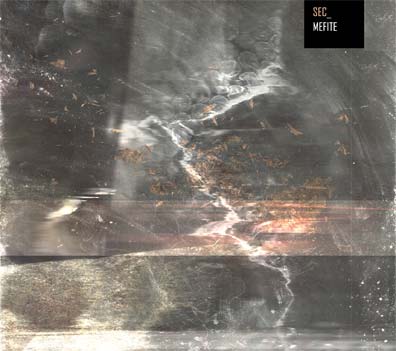 Italian composer SEC_ (i.e. Mimmo Napolitano) has landed here a few times, notably with his exciting and severe Outflow record where we admired the “measured control, economy, tautness, and selection” in the compactness and editing; and the old-school tape-recorder approach delighted Paul Morgan on 2013’s Moscaio album, even though he complained “there’s no doubt [SEC_] has successfully created an alien, unnatural soundscape, but I found that it takes a few listens to be able to comfortably inhabit it.” Here today is Mefite (TOXO RECORDS tx07), a highly alarming and disorienting composition, which like Outflow also contains a near-overload of information, and which like Moscaio successfully induces strange sensations of loathing and dread.

Mefite has a classical theme, inspired by the Roman fertility goddess (called Mephitis in English) who was often associated with water, swamps, and volcanoes; some scholars think she’s the personification of the sulphurous gases which were naturally emitted by these geographic features. Our man Mimmo is 100% sold on the myth; he describes the Ansanto Valley with some relish as a secret cult location where “horrible gas emissions…kill those who go too close”. These themes are bolstered by the murky cover images, portraying inhospitable rocky areas, perhaps riddled with lava streams and poisonous gases.

To articulate the voice of Mephitis, Mimmo has enlisted the talents of M. DellaMorte, who intones her vengeful words through a distorting filter as if speaking to us mere mortals using the broken telephone receiver of The Gods. She may have got the job based solely on her surname, which translates as “Of Death”; hopefully she’s a gothic beauty with stunning black hair, a wan expression, and prominent cheekbones. The texts she’s speaking were derived from a film about insects by Peter Liechti, which in turn was inspired by a book bearing the chilling title Diary Of A Mummy by Shimada Masahiko. Apparently it’s a macabre story about death by starvation, told in diary form. Brrr…but I do like this multi-layered approach to culture, allowing one subject to illuminate another; juggling the nested ideas seems like just the sort of complex exercise that SEC_ would enjoy, given his elaborate music.

This barrage of information reaches a head near the middle of Part 2 of the composition, creating an overload of unnerving sounds in which the relentless voice continues to chatter implacably. Matter of fact there are multiple speaking voices, generating nightmarish sensations. I should count myself lucky I only have a CD; the original performance in Naples was a multi-channel operation, involving radios and speakers with a live vocal performance. Small wonder the inhabitants dreamt of death by volcano that night, some of them reliving the last days of Pompeii.

I had an idea that European electro-acoustic composers of the 20th century also liked to do occasional updates on Greek and Roman myths, but I can’t find any examples now to support this claim. Even so, one senses that SEC_ is following in a good tradition, giving free vent to his tortured imagination through these strong themes, and creating powerful music thereby. Very good! From 28 June 2016.