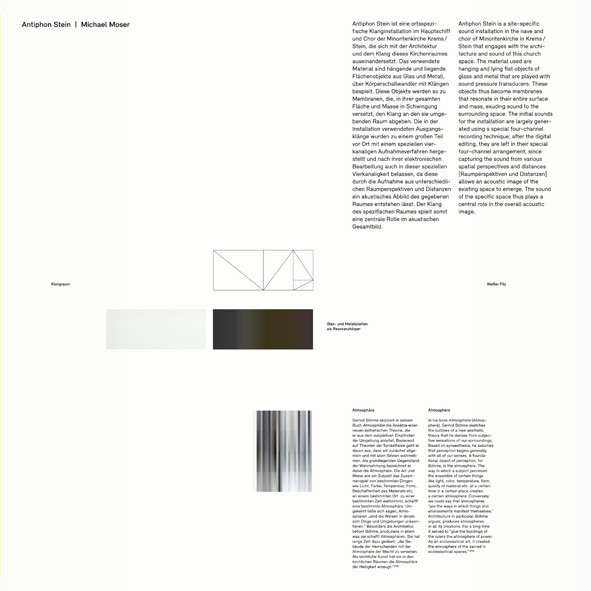 Michael Moser is the Austrian musician who plays a cello and performs in the amazing quartet Polwechsel, and has sometimes played in the equally amazing Zeitkratzer Ensemble. Here he is now with Antiphon Stein (EDITION RZ ed.RZ 9010-11), an astonishing site-specific composition of avant-garde music which he plays and performs with the help of percussionist Berndt Thurner and organist Klaus Lang. It’s also released as a double LP in a gatefold sleeve with a booklet of notes, on the lovely Edition RZ label. Robert Zank has put out a steady flow of exceptionally fine European avant music on this label since the late 1980s; in the 1990s, they tended to appear in uniform black covers with severe minimalist tyopgraphy, and high quality pressings, so the listener knew they were in for a treat of hard-hitting, no nonsense experimental music that could lacerate your brain, face, and senses.

Antiphon Stein was recorded in a church – the Minoritenkirche Krems / Stein. As is often the case in such situations, the music is intended to engage with a very specific piece of architecture and space, and the intention is that “the sound of the specific area…plays a central role in the overall acoustic image”. Did I mention the sheets of glass and metal? They are probably the central component of this whole work, and indeed they function as the principal “instruments” of Antiphon Stein. He’s got about 20 of them, either hanging in the air or lying on the floor of the building, equipped with transducers; the idea is to transform them into “membranes,” so they act as very powerful resonators to relay and amplify the sounds created in the piece, reflecting them back into the building and to the audience. It’s to do with a precise understanding of acoustical vibrations…in typically Germanic fashion, the precise dimensions of these sheets of glass and metal are included in the booklet, presumably forming an essential part of the composition, should any future composers wish to restage the work.

The record is a very rewarding listen. At one level, it might be considered an advanced form of Electro-Acoustic Improvisation, the musicians pushing out their slow but very deliberate statements on the organ, percussion, electronics, and other instruments. But they’re doing this in a very “hot” and resonant environment, the sheets of metal and glass picking up every gesture and redoubling it, pushing it back against the walls and ceiling of the church. From the start, the music is operating in another rich dimension, enabling Michael Moser and his team to “play” the church itself like another musical instrument, through the simple expedient of this very exacting sound installation set-up.

In other hands, all of this might have resulted in a worthy-but-dull process exercise. But every moment of Moser’s 80-minute epic here is tense, exciting, and even somewhat threatening in its black intensity. It’s like a more focused and directed version of early AMM Music, without any sense of a need to explore tentatively; Moser knows exactly where he is going in this unearthly territory, and each musical utterance exhibits this certainty with an almost grim, metallic precision. We’ve heard a number of cathedral or church-based recordings of art music over the years, some of them by improvisers, some by composers; from what I recall, it’s always been interesting which aspect of the church they tend to emphasise or privilege over others. In Moser’s case, he’s effectively refitted the church environment for his own ends, to turn it into a resonating space and help to form a fully integrated compositional statement. Highly recommend this strong piece of modernist genius. From 25 May 2016.