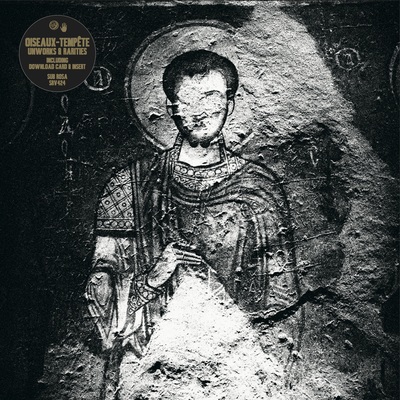 Last noted Oiseaux-Tempête in 2015 with their second album ÜTOPIYA?…this French art-rock band eventually won me over through the sheer persistence of their music, even though I maintain they’re still too clever for their own good and the weighty bombast of their tone is something of a downer. Some of these reservations persist as I spin Unworks & Rarities (2012-2015) (SUB ROSA SR424), a set of six cast-offs where the core duo of Frédéric D. Oberland and Stéphane Pigneul are joined by assorted guest musicians. I don’t think this release was planned as an “album” as such, but it still coheres in a fragmented, semi-narrative way, perhaps because the band strive so hard for this “cinematic” resonance in everything they record. Every other track sounds like it’s lifted from a movie soundtrack, or is aspiring to be selected for that honour. A very depressing “state of the world” art-house movie with a message, at that.

In this vein, the track ‘No Go(l)d No Master’ stands out as a showcase for a clutch of spoken-word samples which appear to have been sourced from a series of hysterical pan-International activists, lamenting assorted crises that blight the 21st century globe; they make their plaint against a backdrop of free-form musical noises, where Oiseaux-Tempête do their take on the improvised art-noise thing in the mode of Art Bears or Henry Cow, only much more stilted and rigid. Not all ghastly though, as this track benefits from the splendid Ondes Martenot textures played by Christine Ott, a talented French lady who’s a composer in her own right, and who made a record for Gizeh Records this year; she also shines (though less brightly, as she’s buried in the mix) on ‘Black As Midnight On Moonless Night’. The Ondes Martenot is an unusual electronic instrument which I usually associated with recordings of Messiaen’s work, though it has appeared elsewhere.

Equally narrative in mode is the story-telling epic ‘The Strangest Creature On Earth’, which for its musical setting adopts a sort of sea-shanty dirge played on keyboards resembling concertinas; it stomps forward at an unvarying leaden pace and the overall mood is frozen stiff. On top of this, G.W. Sok (from The Ex) adds his ludicrous recit in a memorably bad piece of acting; his over-wrought declamation is cringe-worthy. Even so, there’s a cathartic effect produced by this grim, bone-chilling musical fable, a tall tale worthy of any American huckster from P.T. Barnum onwards. It’s also notable for the contributions of bass clarinet player Gareth Davis, whose work also impressed me on the ÜTOPIYA? album. We hear a few more moments of his splendid tootling on ‘Nec Mergitur’, a lively quasi-ethnic doodle which closes the record.

Oberland (guitars, mostly) and Pigneuil (synths, mostly) dominate the record though, and their heavy-handed instrumental style is shown for instance on ‘Quai De L’Exil’, a guitar-rich piece which strikes the listener as a French over-thought attempt to do the Dylan Carlson Earth thing; skeletal arrangements, emphasis on resonant twangs, and a sense of unearned self-importance handing over every ominous note and sound. ‘Black As Midnight…’ follows a similar template, predicts imminent catastrophe for mankind, and like many of the pieces here builds up to an intense freak-out climax at the end…for all their posturing, they’re still conventionally rockist in many ways. ‘Eclipse & Sirocco’ is admittedly quieter, a tasteful synth drone epic which in this context is positively serene, but still conveys a sense of tragedy and disaster on a global scale. As with previous record, I can’t escape the sense they’re trying to tell us something about the world in their musical surveys, and don’t like what they see. Last time the message was bolstered by numerous symbolic images and photos on the digipak, an onslaught of bombast I am spared on this occasion as I only have a promo card sleeve with the cover image of a defaced icon. A blinded saint, perhaps also appalled by the world as it was in the 6th century…From 25 May 2016.