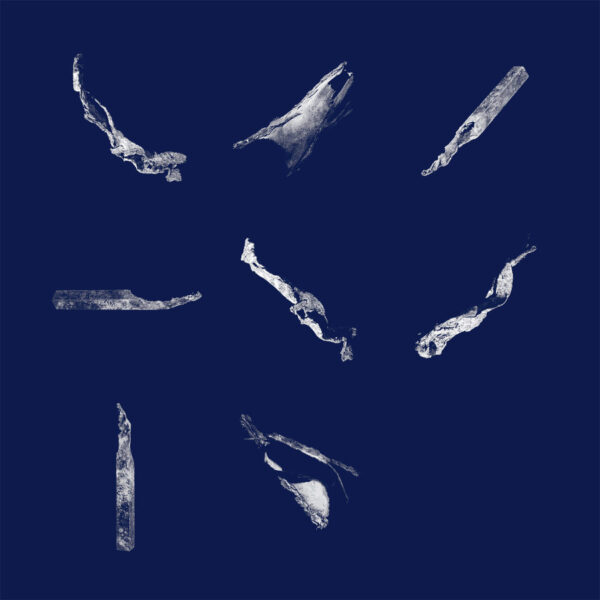 American-born sound artist Pierce Warneke mostly lives and works in Europe, and has surfaced here before mainly in the context of Emitter Micro, that interesting label that has been home to a few small-run releases in bizarre packaging which contains anonymous, perplexing and alienatingly severe electronic sound art. I often associate him with Berliner Christoph Limbach, and both of them appeared on Four Corners Of The Night, a cassette tape released by Staaltape around 2012. Warneke has now made a superb album called Memory Fragments (ROOM 40 RM479), where he performs electronic music using assorted devices and methods such as the electromagnetic coil, contact microphones, feedback, and a process called “FM and additive synthesis”. And some conventional instruments, including piano and guitar. He’s joined by the bass player Yair Elzara Glotman, Kris Limbach (see above) on percussion, and the saxophonist Pierre Borel. In addition to this, there are field recordings gathered from America, Portugal, France and Germany folded into the equation.

The set is thus far from minimal or severe, and instead offers a rich set of complex and intriguing tones for the listener to explore and move around inside. With a descriptive paragraph explaining something of the origins of this work, Warnecke uses an entire thesaurus of terms which mean more or less the same thing – the message that comes across is constant change and reworking, suggesting he manipulates his sizeable gobbets of sound like so much plasticine, remoulding them into toy farms, cities, office workers and Noah’s Ark configurations like a grown-up child ought to do. A large number of contemporary sound artists are into the “reworking” thing these days; I suppose it’s much easier to tinker with sound files in the computer than ever before, and while some of them may hope to align themselves with the early geniuses of musique concrète, quite often they simply produced reams of over-cooked murk and spew, which has been baked in the innards of a laptop for far too long.

We can’t level that accusation at a single track, or a single moment, on Memory Fragments; every musical utterance has a certain weight, and there’s a solidity and crispness to the sounds that is impressive. Although events do tend to coagulate into a continuum of some sort, it’s never a mindless or boring process drone; and the strange weightless journey into space is mapped with a series of very distinct and separated sound events, acting like milestones. It’s a very exciting and inexplicable noise.

There’s also a certain solemnity to the music, as if every utterance were delivered by an undertaker wearing a large top hat and a grave countenance. This may have something to with the ponderous track titles; each one nearly a sentence, or title of a book chapter (a book one never hopes to read), and to boot they’re arranged under two headings, suggesting the book is a two-volume monster of epic sweep. The trend of these titles reads like an attempt to describe the phenomenon of memory itself, clasping at concrete images that might capture it in some way. In that context, the phrase “built on folds and braids” seems especially resonant. The puzzling cover image (uncredited) may also be an attempt to pin down the elusive idea of memory into a visual form; curlicue twisted rags of cloth or paper spin in space, or are arranged in something resembling a grid.

Warneke is attempting to say something about the human mind as a recording medium. The brain can replay memories, but it might do so in a faulty manner, so that the memory never matches the actual experience. This volatility interests him, and the record Memory Fragments expresses this idea by “taking samples (sound, images, objects) of a physical space and then placing them in an imaginary process of transformation and transience that slowly erodes these digital memories until disappearance”. From 25 May 2016.