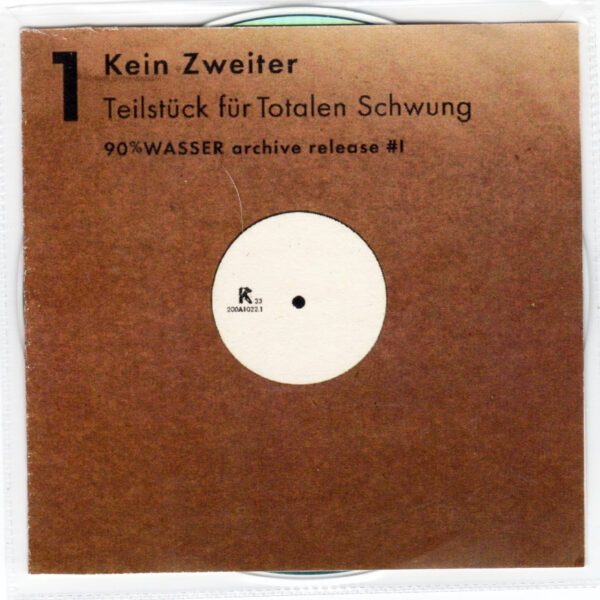 The front cover of Teilstück Für Totalen Schwung (90% WASSER WVINYL022) is stamped with the text “archive release #1”, which made me think this was a rescue job from the past history of electronic music brutalism. This crude electrosynth noise certainly has got that “1980s edge” everyone is banging on about these days. “Past history” is about 35% right, since though Teilstück is a new record, the creators Kein Zweiter have an interesting history that starts in 1989.

Apparently the duo Gort Klüth and Klaus-Helene Ramp managed to endure each other’s company for about four years, then broke up. Then they decided to reform in 1998. Oddly enough there’s no evidence of any records released in all that time, until Muskeln + Kraft = Überlegenheit appeared on this same label in 2006. This record made plain its preoccupation with muscle-building young men pumping up their sinews, and may even have certain undercurrents of homo-eroticism. After another ten-year sabbatical, we now get this little gem. I’ve always been keen on the sub-genre of “men shouting and chanting over synth noise and beats” in electronic music, and I suppose we’d have to kow-tow to D.A.F. (who clearly inspired this duo) as the past masters, or the creators of the template, even.

But Teilstück goes further down the route of teutonic ugliness, insisting on its own “muscularity” and pumped-up sweatiness with every step we venture inside the gymnasium of endurance. Disco dance music for confused robots, laced with elements of NDW hostility and flashes of modernistic 1990s dub noise in the weighty bass tones. All the entertaining “party animal” material is on side one, where the winning combination of basic drum machine beats, minimal synth attack and single-minded chanting is massively appealing, to say nothing of the coarse and grainy production…side two holds the weirder ideas, including the positively bizarre ‘Endstation Gürtel’ which is like an experimental dream-scape with its fractured construction, horrid voices, and unusual ambient tones. It also offers the epic ‘Der Wagenmann’, which at six minutes is like a Wagnerian opera rethought as disco music with pompous string sounds, jarring dynamics and arrangements, and its lapses into choral singing and wacky sound effects of a drunken sex party from the Middle Ages. Great!

Also of interest: if you buy the LP you get a DVD with a video called Eine Richtung – Eine Saat, made by Jürgen Eckloff of Column One; Anette Eckloff, another Column One member, is credited with the “concept” behind ‘Kreislauf’ on side one. From 25 May 2016.