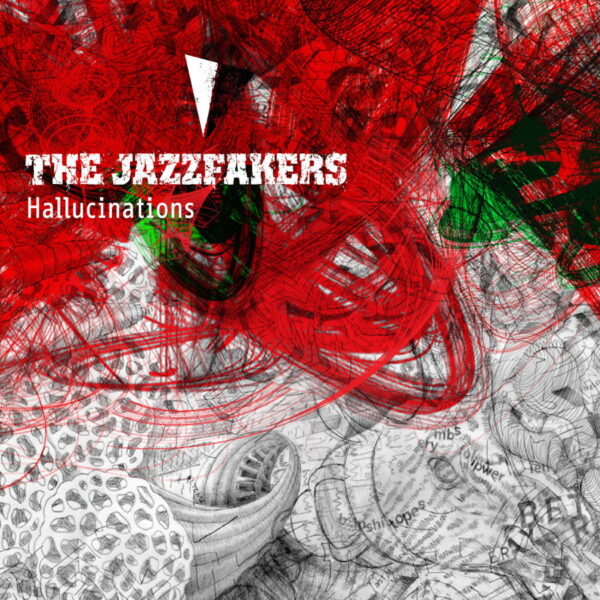 Another rather overpowering record from The Jazzfakers, last heard here with their 2013 offering Here Is Now, a record where “everything explodes in all directions” as observed by Stuart Marshall. On Hallucinations (ALREALON MUSIQUE ALRN064), David Tamura is the sax player, also works keyboards and guitar, and he leads this agitated New York combo down their musically omnivorous tunnels and hallways; Robert L. Pepper, from PAS, adds violin and electronics, and the rhythm section of Luczak and Zwyer have to work time-and-a-half (plus tips, extras, etc.) just to keep up with the aberrant howls and self-indulgent blurts emerging from the two soloist stars.

Tamura’s overly-expressive and juicy sax honks are much in evidence, and I’d never made the connection to John Zorn before, but perhaps the presence of Zorn’s producer Martin Bisi (who recorded Hallucinations in Brooklyn) has stirred a distant memory in that direction. If pushed, my preference is to plump for the strange electronic brew such as we hear on ‘Bicameralism’, a fuzzy nightmare which might result from Pepper’s violin / electronics combo or Tamura’s keys. There’s probably not much point in looking for connections to “jazz” as we understand it in these over-wrought splurges of abstract noise and crazy near-random eruptions, since the band are clearly equally informed by many other genres of music, including rock, free noise, free improvisation, and classical avant-garde composition. When Tamura does throw a jazzy piano riff into this stew, it seems at once too obvious, too throwaway, and too glib.

No denying he and all the Jazzfakers have tremendous chops, but on today’s spin I’d prefer something with a little more arrangement behind it. This time, the record is “themed” on the work of Oliver Sacks who apparently wrote a book by this title, and the press claim is that each member of the band was “under the influence of a different hallucinogenic state” during recording. Oh yeah…as if! From 25 May 2016.