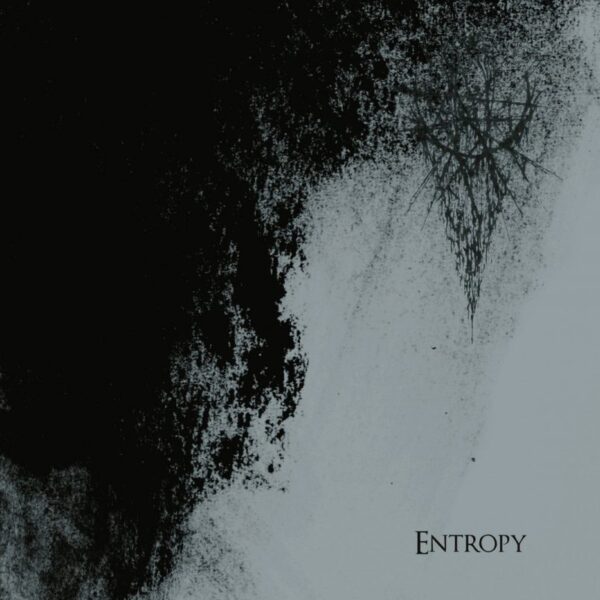 Only recently have Spire issued their debut album in spite of having existed for nearly a decade. The long gestation period (with an equally long wait for their fans!) has finally paid off: “Entropy” is not so much an album of very dark ambient ritual black metal songs as it is a full dive into a universe of deep alienation, untold pain and never-ending despair. The immersive nature of the music reminds me a great deal of French BM legends Deathspell Omega and it’s possible DSO served as an inspiration and the standard against which Spire strove to craft and refine their music. In that, Spire have certainly set themselves a high target to aim for and they have done well indeed.

Each track, no matter how long or short, is epic in itself which says a great deal about how the musicians composed and crafted the music and constructed the whole thing – not just the actual song itself but its atmosphere, the effects that flesh it out into a three-dimensional beast – so that the entire structure is a soaring monstrous creature of unlimited malevolence, magnificent in its clear and crisp sound, and utter crystalline coldness. The first track “Ends” demonstrates Spire blasting out atmospheric BM doom drama the equal of any music in that genre to be found. It’s really with “(Remake)” though that we enter territory that maybe not even DSO have dared to venture into: here we come into a stupendous Ninth-Layer-Of-Hell region of deranged crunching guitar riffing and reptilian echo-cacophony that plainly spells out “Abandon Hope All Ye Who Enter” in case we still harboured such child-like notions in our heads. Even then, we only get a glimpse of the depths of the abyss that beckon before we’re whisked off to the next track, an equally intense work of thunderous bass, rapid-fire percussion and pounding visions of eternal hell.

So far, so good … and then we come to “(Unmake)”, an almost all-ambient track featuring guitar trilling melody and feedback against a background of pulsing whisper noise effects. Putting this track here after mostly short though intense pieces does take the wind out of the album, especially as this is one of the longer tracks, meaning that the song coming after has a lot of work to do reclaiming the earlier intensity of the music. Fortunately this is not difficult for the title track to do, building up to behemoth proportions with nuclear-powered blast-beat percussion, martial riffing, loads of screaming vocals and deep-end guttural groans, and bass lines that travel their own off-centre rollercoaster paths into derangement.

The album could have done with slightly longer songs in its earlier half – “(Remake)” alone is such a stupendous song that cutting it to about 3 minutes should have led to six months’ community service and maybe a small fine – so as to balance the long tracks that come in the album’s second half. Apart from this, and the slight loss of momentum that comes with having a long ambient piece after the halfway point, I don’t find much to fault this album. True, a lot of the music sounds familiar if you’re a DSO-obsessive freak and Spire could have brought something more innovative to their brand of very dark and occult-sounding black / doom fusion. The band has work cut out for it to develop a more original sound and not be mistaken for someone else’s project. Even so, “Entropy” is still a very ambitious work, sounding very complete in its aims and vision, with a powerful and layered style. The best thing about the album is its immersive nature, how it sounds so much like a real hellish world where pain, despair and lack of hope reign, that it feels more real than the actual world we live in.