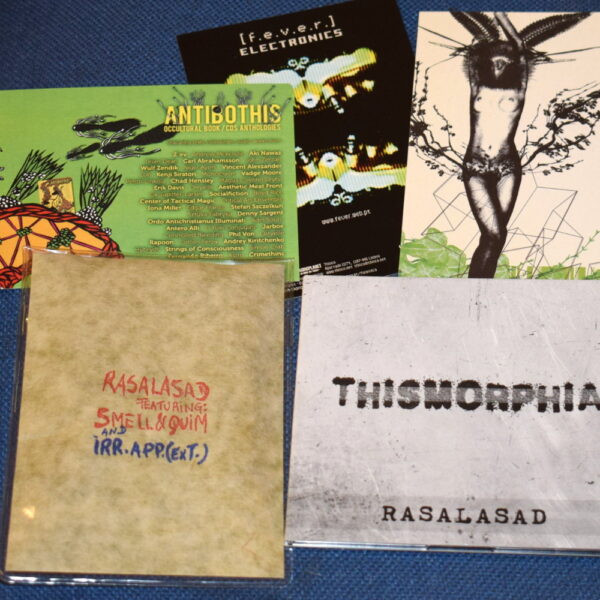 Got a bundle of goodies from Portuguese fellow Fernando Cerqueira, sometime member of Ras.As.Ghul, who seems incredibly active and productive in the remix-noise department as well as running the Thisco label and publishing a book/magazine venture called Antibothis. He is sent sound sources by prominent noise artists around the world and remixes them under his Rasalasad alter-ego. One such item is a split cassette in his THISOBEY series, featuring Irr.App. (Ext.) on one side and Smell & Quim on the flip. Irr.App. (Ext.) – American antibiotics online, player Matthew Waldron – has been steadily maintaining his own stream of marginal noise releases since 1997, and what snippets have crossed my personal brow I tend to recall as baffling and vague, but he did manage to insinuate himself into the good graces of Nurse With Wound, so there you go. Under the editing tongs of Rasalasad, what results from the collaboration is 16 minutes of menacing digital drone, with an undercurrent of slowly-chattering non-Techno rhythms; I get the feeling Cerqueira is making maximal use of his time-stretching tools, and creating four pounds of musical pulled pork.

Smell & Quim are an English phenomenon whose members may or may not have included members of The A Band, who have released a trail of unpleasant slime stretching back to 1988, and are masters of the Anglo-Saxon penchant for toilet humour and vile sex jokes in their titles and covers…I bet their music’s great, though I never got sent any during the glory days of the 1990s when this sort of anything-goes collective noise was still new and exciting. I was certainly hoping for something more abrasive, offensive and lively on their half of the THISOBEY tape, but it’s simply more solemn digital drone, with a clonky loop-rhythm counterpoint. In places, we might as well be hearing a slightly darker version of a Vangelis album. Not impressed.

The CD Thismorphia (THISK075) showcases Rasalasad remixing sound sources from both of the above, and a further 9 artistes, including Emil Beaulieu, Merzbow, Antonym, Wildshores, Jarboe, and French 1990s industrialists Von Magnet. This is a slightly more successful proposition than the above, and it may be that the shorter durations make it more appealing. For instance, ‘Astellar’ with Irr.App. (Ext.) is a dramatic slice of gothic drone-menace with bold electronic squoops painted on its surface, and ‘Value’ allows Jarboe to chill the listener instantly with her ghostly whispering voice. ‘Spectre’ with Emil Beaulieu contains a health dose of unpleasant abrasiveness, which contrasts nicely with Rasalasad’s more polished-sounding digital drones; this formula also works brilliantly on ‘Axx’ with Merzbow, where Rasalasad leavens the Japnoise-assault with his symphonic synth keyboards. ‘Stellar’ featuring Antonym also intrigued me, and made me want to start seeking out a copy of Native Dystopia, his 1990 cassette. Some nice moments on this CD with its drab grey cover, but I’m not feeling the collaborative aspect much; Rasalasad’s default setting is gloomy ambient digital drone, which he tends to overlay with whatever sound source he’s sent. It’s a basic cut and paste job with neither side paying enough attention to each other.

No denying though that Fernando Cerqueira has won his spurs as a significant figure in underground culture. He’s been publishing print and music since the late 1980s, through his magazine Atonal and his label SPH records, which released some primo tape / noise / industrial materials of various shade of darkness in the 1990s, including Brume, The Haters, Merzbow, Lieutenant Caramel, Crawling With Tarts, Smersh, Another Headache, and Maeror Tri. Many of these continue to be associated with Thisco, whose roster of artistes is impressive. There’s also the book and CD anthologies released under the Antibothis imprint, which continue the traditions of magazines like Headpress with their fixation on the bizarre, the extreme, and the transgressive. From 23 June 2016.