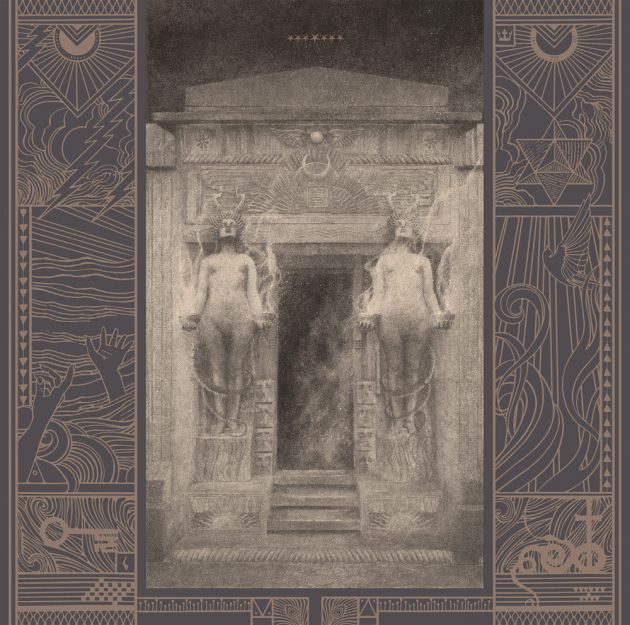 If you’re thinking “there’s no such word as irrepassable”, well you’re wrong now because US West Coast black metallers Ash Borer have just brought it into being. Go on, is there another word in English that expresses the sense of wanting to pass over or through a threshold or portal, finding yourself stuck, yet being unable to go back, and being possibly condemned to remain in eternal limbo? This is the sense I have with the title of Ash Borer’s most recent album after a long hiatus of three-and-a-half years after the band’s last release. The cover art also conveys an impression of an occult temple entry into another dimension, one that will have a dramatic effect spanning the rest of your life if you dare try to go through; and if you don’t, you’ll remain in a child-like state forever, unable to progress to a higher spiritual level or state of conscious existence.

The title track is a mighty roaring guitar-dominant beast rampaging through its jungle domain, all thudding drums, whining guitar and subterranean growling vocals. The sound is very clear and the style of music is close to very melodic, clean-sounding BM with thrashy elements. Any pretensions to being ambient BM are being left behind and Ash Borer is becoming a full-fledged guitars-n-drums band. This in itself presents a challenge to Ash Borer to convey atmosphere, mood, intense emotion and their full, densely layered style without the help of keyboards. Stretched over 11 minutes, the title track appears a bit one-dimensional as the band concentrates on piling riff upon riff and plows its path speedily and relentlessly, forcing listeners to follow as best they can. The slower, bass-heavy (in its first half anyway)”Lacerated Spirit” is more successful at carving out a three-dimensional sound and distinct atmosphere with feedback drone and an experimental bent. Likewise “Lustration” is another step further into the twilight world promised by the album title with deep drone, repeating guitar strum shrouded with echo and moaning voices and effects suggesting the presence of ancient spirit beings.

The album does have its bombastic moments and at times these and the long passages of never-ending blast-beat drumming, guitar noodling and background demon wailing can start to sound like filler material. There may be some fine melodies and moments where the music is intense and unsurpassable but when songs are very long and get carried away by constant repetitive fidgeting, no matter how technically good that is, such jewels can be missed. Listeners who find the second half of the album something of a drag (I have to say I did) can spend some time with the songs to their halfway points and shoot through to the final track “Lustration II” which is a return to the slower, complex doomy BM style of earlier songs like “Lacerated Spirit”.

As you can guess by now, this album was a very mixed bag of good, avant-rock music and longer scrabbling pieces of endurance-test proportions. The experimental ambient avant-rock style of tracks like “Lacerated Spirit” and the two “Lustration” pieces unfortunately doesn’t extend all the way through and the distinct sounds these have compared to the more straight-ahead melodic BM of the rest of the album make “The Irrepassable Gate” a very uneven recording. Well, Ash Borer didn’t exactly promise us a smooth ride through what may very well be a transition phase in their career. It seems that “The Irrepassable Gate” symbolises a formidable challenge for the band at this crucial moment in their history, whether to advance in a different musical direction or stay as they are, as it is a listening experience for its audiences.