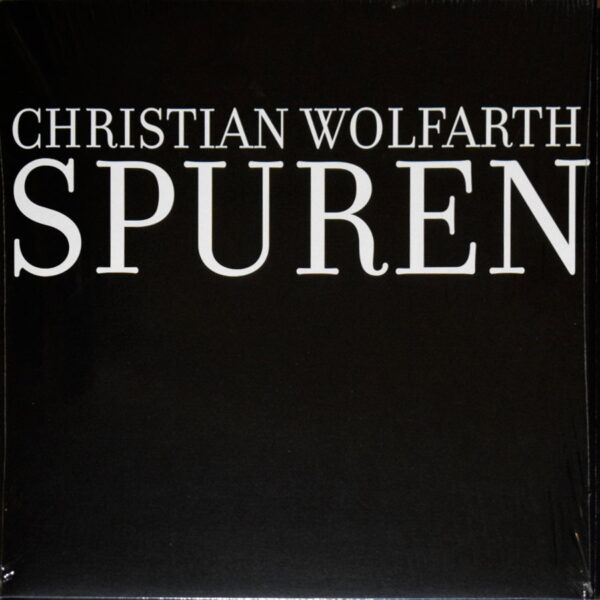 Spuren (HIDDENBELL RECORDS 009) is a very good solo percussion record from Christian Wolfarth, released in Zurich on his own Hiddenbell Records. This player has appeared in not a few collaborative settings, for both modernist composition and free improvisation, and given what we hear on Spuren it’s not surprising to me that he’s worked with Jason Kahn. We’ve also heard Wolfarth in these pages in slightly more conventional jazzy settings, such as on The Holistic Worlds of Wintsch Weber Wolfarth and Thieves Left That Behind.

Wolfarth’s achievement here is mainly to do with the sound he makes, the timbres and the textures, all of which are arranged and performed so as to maximise contrasts – various grains and weaves of drum sound rubbing up against each other like so many fabric swatches in a choice tailor’s workshop. He’s not after mad disjunctures of sound, and the total effect is wholesome and integrated, creating a very satisfying continual ever-changing rumble across two sides. The accretion of sounds is intended, I believe, to have a certain effect to do with creating an illusion of depth, a sense of perspective. It’s not the same thing as recording engineers strive to create when they speak of “spatialising” the mix; here, its more like a very sophisticated kind of magic-eye painting, applying principles from abstract art.

Another way to look at this cross-patching effect is to read his sleeve notes, short five-line paras of concise text (much like an abstract poem) which might describe the either process of creation or the finished work itself, and allude to the works of Stan Brakhage, the underground film-maker to whom so many musicians are in thrall. If you think of Brakhage’s work as continual overlays of contrasting textures, the connection with this drumming record seems plausible. “Flecks become shards become blocks” is one striking phrase that describes this accumulation of detail; “The surface is variegated and open to the incidental” is another. Wolfarth has two specific Brakhage films in mind, one of them the famed Mothlight where Stan glued wings of moths directly onto celluloid in his pursuit of shining light through layers of semi-opacity.

At one level, this may sound like a recipe for formal process art with no discernible listening pleasure, but Wolfarth is a consummate craftsman, restricting himself to a deliberately limited range of possible sounds and performing them with rigid concentration. Through these means, he achieves sublimation very effectively, and after five minutes in I was utterly mesmerised by the stark intensity of this work, its gentle but insistent core of meaning. From 5 May 2016.