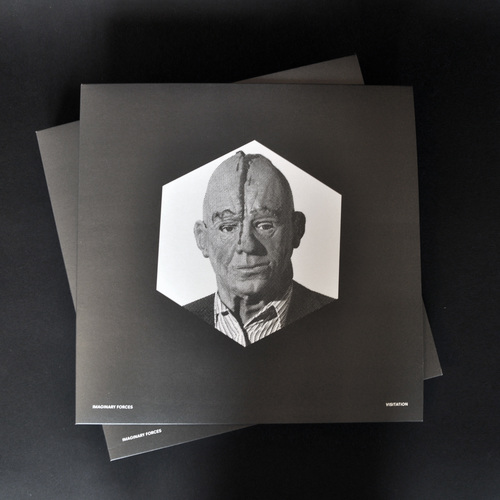 Imaginary Forces last came our way in March 2016 with the unsettling and implied violence of Corner Crew, a record he made for the Sleep Codes label. With the Visitation EP (FANG BOMB FB026), we’re back on the shadowy ground which we know and love him for ever since his 2013 Begotten cassette for the same label, and here are four tracks of grim and slow avant-techno laced with diabolical repetitions, mercilessly loud and heavy bass thumps, and joyless beats that are intent on propelling the listener down a slow but sure slide into oblivion.

London player Anthoney Hart projects a low profile in his music and image, a strategy which I admire heartily, and every release seems to be an attempt to undermine our collective certainties, using stealth and invisible means…each beat is a hammer blow delivered with the surgical skill of a geologist prising loose a keystone from a pyramid of power…the temples of the Establishment are sure to topple, but not before our masked hero has long made good his escape under cover of night. The A side contains ‘Preternatural’ and ‘Enlightenment’, both hugely effective pulsation and throb experiences that can sap the vitality from a hundred civil servants in just ten minutes.

The B side includes the unusual ‘(A Drift)’, a version of a Closed Circuits track which is even more skeletal and bare-bones in its arrangement (if that’s conceivable), where the beat is unprocessed and raw, arriving like the knocking of a hammer on an empty wooden crate (or coffin). Chris Page intones a dark and defiant lyric in a resigned tone of world-weariness, while around him strange minimal electronic tones dart about like small birds.

To complete the package and its tone of strange despairing symbolism, we have the excellent cover art: a troubling image of a man with a head split in two, blood trickling down his nose, yet wearing an impassive and calmly accepting expression. His striped shirt and jacket might almost mark him out as a businessman or other enemy of society. The half-tone printing employed on this monochrome image adds to the weird mood; you certainly wouldn’t welcome a “visitation” from this menacing apparition with his grey, clay-like features. From 19 May 2016.