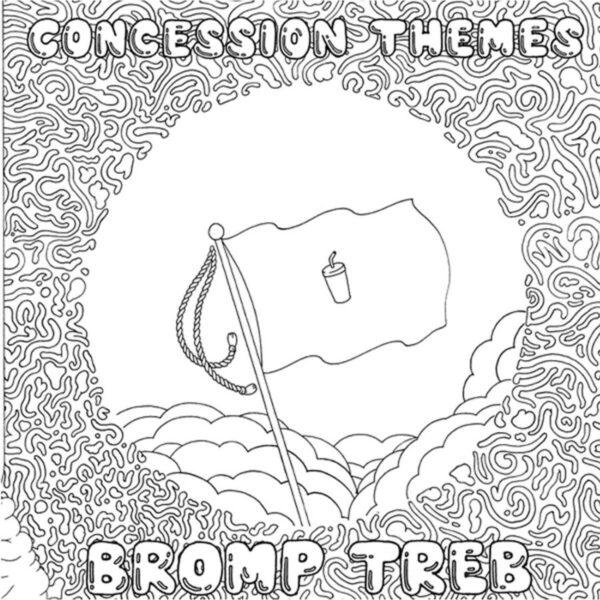 Strange record of electronica by Bromp Treb in the form of Concession Themes (FEEDING TUBE RECORDS FTR 243)…Bromp Treb is a solo act named Neil Young Cloaca, who has been releasing music under this name since 2002, sometimes on his own label Yeay! Cassettes; his Loop Rotator Pool from 2010 contains no fewer than 77 tracks, which may be an indicator of something. Cloaca favours home-made and broken lo-fi sounds, producing everything with tapes, synths, samplers, and mics, and passing most of the results through cheap distortion techniques. He certainly doesn’t lack for a sense of fun, as can be readily gleaned from the cartoony cover art and insert, and the jolly titles such as ‘Pennies from The Back Of Displeasure’ or ‘Pest Promenade’, the latter of which would have made an excellent theme for a 1930s Silly Symphony animation. The press notes for this release invite us to consider Bromp Treb’s work as a form of dance music, but one that subverts the norms and stereotypes of the genre; “what if…you threw all those beats and tempos at the ceiling and then just let the pieces fall wherever?” is the rhetorical question posed by Angela Sawyer. Concession Themes is presumably the answer. Quite good fun and vaguely unusual sounds, and throwing pieces in the air is always a good working method, but this LP is thin on substance and extremely wanting in production depth; each track is more like a doodle than a finished work. Many of the generated sounds, which Sawyer politely describes as “whimsical”, strike me as just plain nonsensical. From 17 May 2016.