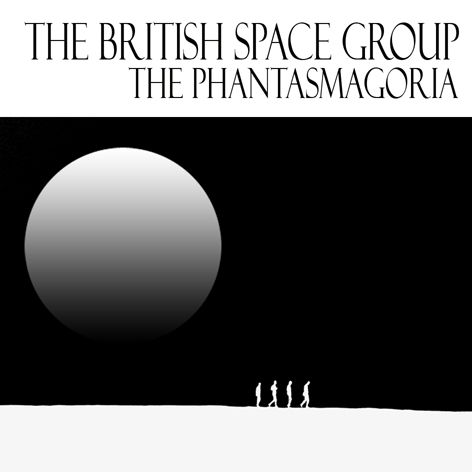 The British Space Group is an alias for Ian Holloway, the talented UK player who owns and operates the Quiet World label, home to many strong releases of lyrical and poetic music in the synth and drone areas…he also publishes his writings under his Wyrd Britain blog, a highly personal exploration of strange things and strange places in the United Kingdom, heavily influenced by what he finds in science fiction and fantasy paperbacks, cinema, and TV shows. I mention the latter as a way to put in context The Phantasmagoria (QUIET WORLD FIFTY SIX), Ian’s new collection of short electronic instrumentals. It’s a compilation of all three Phantasms EPs which were previously published on Bandcamp, over a five year period – this stretch of time indicates the amount of thought and reflection that Ian, clearly never one to rush things, puts into his work.

In each of these three suites, working as The British Space Group, Ian explicitly plays homage to some of his favourite themes and preoccupations, and in so doing he also evolved an interesting working method. The first set, released in September 2010, was inspired by Doctor Who, and (needless to say) the music of the Radiophonic Workshop. Rather than simply pastiche the sounds and music of the Workshop, Ian wanted to work within a structure, and so he came up with an imaginary storyline to which he could compose the score. Well, almost – he got as far as devising enough plot points to create what he calls “a suitably vague story arc”. This saved him the burden of having to create a complete television screenplay, even though he has long wanted to express himself in this area, and it’s clear that in his own mind there’s a perfect Doctor Who episode which has never been filmed, but contains all the elements that excite his imagination (including “robot mummies…and Victorian sewers”). The provisional narrative as expressed in his list of titles was enough for him to create the music. And with evocative titles such as ‘The Control Room’ and ‘A Deeper Puzzle’, it’s likely that Ian has drawn deep from the well of the Patrick Troughton period. Accordingly, the music here – comprising short cues, some of them under a minute in length – strikes the perfect balance between suspense, humour, and pastiche. Full marks so far.

For Phantasms II, released April 2011, he applied much the same method to another source, the ITV series Sapphire & Steel. In his notes, I like the way he assumes his audience is as besotted as he is with cult TV and thus completely familiar with this offbeat series from the late 1970s, and feels no need to explain the (admittedly ambiguous) premise of this Peter J. Hammond creation, nor to mention that it starred Joanna Lumley and David McCallum, which to me is a casting anomaly bordering on the miraculous. Holloway remembers the strangeness of the plots, however, as a thrilling combination of the “mundane and the obtuse”, and he wanted his music to evoke suspense and “unease”. For the most part he succeeds, but Phantasms II is also a rather bitty collection and doesn’t quite hang together so well; there’s one too many “clunky” synth sounds and lame disco beats, though this may all be part of the subtle homage to the period. This was originally issued with a superb cover image, not present in this reissue, that strikes exactly the right note of creepiness and compelling eerie charm; he doesn’t quite capture that same tone in the music, but he tries. Again, a lot of the work is done by the titles, which do much to trigger the audience’s imaginative contribution; ‘Waiting in the Blue Room’, ‘A Hand In The Wall’ and ‘The Melancholy Machine’ are all plausible submissions as TV episode titles, or titles of fantasy paintings.

Phantasms III, released in March 2016 on Bandcamp, is the most ambitious of the three sets and contains some of the best music too. At first, Ian’s impulse was to apply his same method to Quatermass, one of the high watermarks of British sci-fi weirdness; through both TV and cinema versions, Nigel Kneale has permanently warped the minds of many a receptive English youth. Instead, Ian devised something original of his own, referring to the “partially formed unnamed travellers who have lived in my head for the last six years”. This is a very strong way of referring to the power of imagination and the effects of these sources, and indicates Ian is not merely some fetishistic fanboy obsessed with trivia and the minutiae of a science-fiction TV script. Phantasms III tells an ambiguous story of the travellers being summoned on a journey but saying goodbye to a comrade who they leave behind. A simple but evocative tale, expressed in 16 instrumentals of electronic music; it’s a compelling blend of alien strangeness, nostalgia, and poignancy. Once again the titles are an important prop; ‘Through the Skin of the Water’ is my favourite, and makes me think The British Space Group should have been commissioned to provide music for the movie Under The Skin by Jonathan Glazer. Holloway rarely hits a wrong note on this suite, and the music is genuinely unsettling, whereas the first two Phantasms are a tad soft-centred, perhaps hampered by their own need to align themselves with their original sources.

At a time when the Radiophonic Workshop and all things associated with their work have been thoroughly explored and interpreted by many imitative musicians, it takes a rare insight and talent to be able to come up with something as original and personal as The British Space Group. I just have to carp about one trivial detail, and that’s the inclusion of the Lewis Carroll couplet on the back cover. First, it’s been misprinted by one word, which (wearing the cap of a strict English Lit. master from the 1950s) I find unacceptable; Lewis Carroll paid close attention to metre, and he would never have added that redundant extra syllable to his verse, which was always as tautly-constructed as a piece of Victorian furniture. Second, why reference the poem Phantasmagoria at all? It’s a comic-supernatural story about a ghostly visitation, and a glimpse into the lives of the rather mischievous ghosts who haunt houses; I can’t see the connection with the futuristic sci-fi music here. This quibble aside, a lovely piece of work. From 7th July 2016.