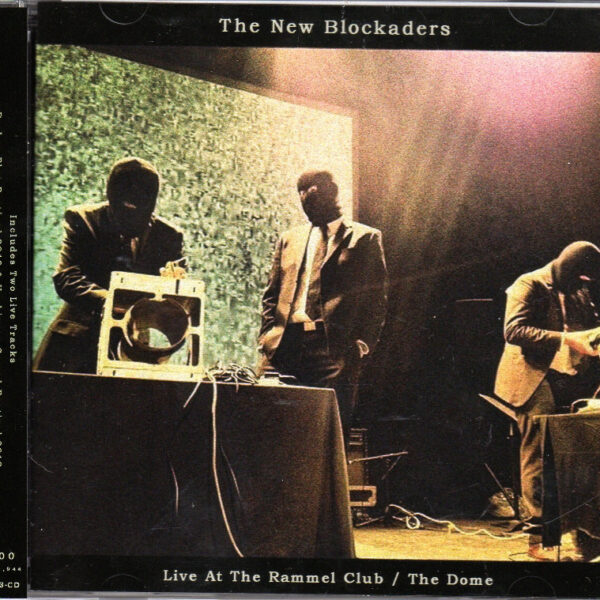 The kings of UK confrontational Noise Music, The New Blockaders, surface yet again with these 2012 recordings on a Japanese CD. Live At The Rammel Club / The Dome (VLZ PRODUKT VLZ 00043-CD) features two lengthy performances captured in venues in Nottingham and London respectively. The first was part of the Broken Flag Festival held that year, the second as part of the Harbinger Sound Festival. That information alone might be helpful to put these recordings in context…after all Steve Underwood, the owner of Harbinger Sound, had just published his first (and only?) issue of As Loud As Possible in 2010, an exhaustive magazine dedicated to furthering the cause of Industrial Music and Power Noise, and what’s more it featured an in-depth overview of the whole Broken Flag thing, in a bid to understand not just the music and the label, but also see it through the eyes of the main contributors to the label, including M.B., Paul Lemos, Skullflower, and…erm…Tim Gane. That publication is the closest I for one have come to getting any kind of purchase on the dark and foreboding world of Gary Mundy and his thoroughly alienated cohorts.

It makes sense that all the brutal noise-loving diehards of the world would wish to keep the flame alive in the form of two Festivals that year, showcasing what they would regard as two important locuses of their preferred form of cultural endeavour. And what better way to underscore these sentiments than by offering a platform to The New Blockaders, who since the early 1980s have been pummelling the ears, minds and bodies of anyone who cared to listen, doing so through their own unique brand of formless, destructive noise, a racket which often appears to have been assembled from equal parts of malfunctioning metal devices, feedback, and the rubble from a bomb blast site. Those who have collected the works of Richard Rupenus and his men over the years may have some idea what to expect from this CD, although The New Blockaders in 2012 is somewhat of a different proposition from the original incarnation. It’s now a four-piece of collaborators.

We’ve heard rumours that other performers besides Richard and brother Phil have been involved in the tour band versions, but this is now confirmed by the credit note here, which clearly identifies Mark Durgan, Michael Gillham, and Phil Julian as the three able supporters of Richard Rupenus for these concerts. True, they stick to the expected form – they still have the ski masks, the jackets and ties, and they still set about the task on stage as though working on an anti-building site where everything has to be demolished before the five o’clock whistle. And they make a tremendous noise doing so. But they also do it knowingly, perhaps a bit too knowingly; a record such as Changez Les Blockeurs could be seen as something of a leap in the dark in 1982, with its creators having no idea if their contribution to the culture would even have any effect. By 2012, we’ve had time to assimilate that assault into our collective bloodstream; and so have Durgan, Gillham, and Julian, next-generation noisesters who are more easily able to step into the ground cleared by TNB, and produce a highly convincing take on the music, but also one that’s ever so slightly “facile”. I’m not feeling the struggle, the pain, the internal strife that Richard Rupenus poured into his best and most alienating work. However, I would like to think that Rupenus chooses his collaborators with care; it’s not the same as recruiting for a tour band version of Gerry and The Pacemakers, after all. This is undoubtedly a “dream team” for a viable performing version of TNB; as Putrefier, for instance, Mark Durgan has produced some scathing statements in the harsh noise mode. His four-CD Hypertension Classics Vol 2., released by Harbinger Sound in 2005, is not something I can forget in a hurry.

Another side of the TNB project is the abrasive, nihilistic “anti-art” stance, a stance which mostly consists of saying “I’m against it” while still striving to locate the music and culture of TNB within an avant-garde framework of some sort, whether that’s performance, Fluxus composition, or visual art history. It involves the careful positioning of TNB alongside fine art, in order for Rupenus to say he rejects it completely, and that TNB has nothing to do with it. On the present release, this aspect is represented by some characteristically hostile paragraphs of invective reprinted from Glissando magazine.

A thoroughly depressing, misanthropic, and negative release; everything about it brings you down, including the sickening colours of the artworks, the extreme bitterness of the printed texts, and the grim, suffocating noise music on the disc. The only development I might remark on is the audience sound; it’s the first time I think that I’ve even heard an audience reacting to TNB. More to the point, they’re obviously loving it, whooping and hollering as if they were mainstream rock fans at a U2 concert. I’m not sure what this means, but I think it’s interesting; perhaps despite all Rupenus’ strenuous efforts to produce a noise and a performance that is completely toxic and fatal to society, that same society still manages to consume it, and enjoy it. From 8th July 2016.