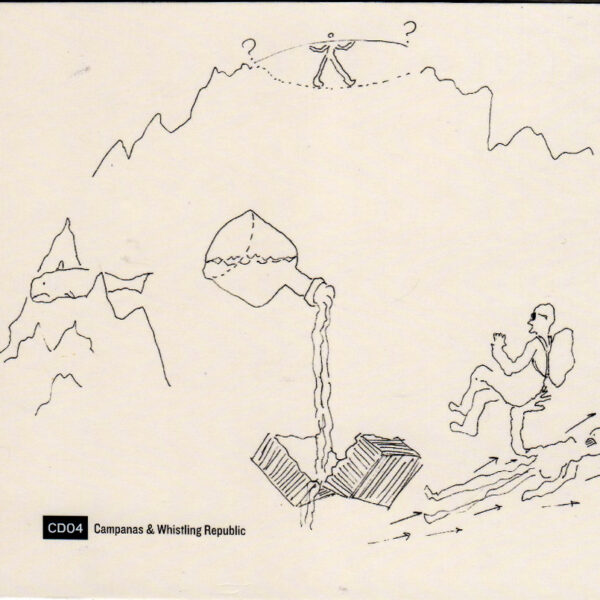 Here is CD04 in the Alessandro Bosetti box set Stille Post (BÔ?T RECORDS BR R010 / MONOTYPE RECORDS mono100). It contains two related pieces under the combined title Campanas & Whistling Republic. On The Whistling Republic, a piece for WDR from 2003, we hear another mosaic assemblage made of fragments of recording, mostly spoken word and a strange whistling language. These elements are underpinned with an electro-acoustic droning sound which grows gradually darker over the course of some 25 minutes, leaving the listener with a highly ambiguous snapshot of something. The theme of The Whistling Republic is to do with communication, a characteristic it arguably shares with all the records in this box. La Gomera is one of the Canary islands, where people sometimes communicate in whistles. This “silbo gomero” as it’s known is described as “a whistled register of Spanish”, and has been included by UNESCO on its Representative List of the Intangible Cultural Heritage of Humanity.

Bosetti may or may not be interested in protecting or preserving that heritage, but he’s certainly interested in it as a language. When he stayed on Gomera, he wrote down some texts – some of them diary records of his sojourn, a couple of them complete works of fiction – and then passed these texts to the locals, asking them to express his words using the “silbo”. He was apparently standing over a mile away at the time with his microphones, yet he still captured these amazing whistles on his tape deck, because one of the features of the “silbo” is its ability to carry a message over long distances. The spoken texts on the record are the attempts made by the Gomerans to decipher and translate these whistles back into the spoken word. As ever, I expect the lively cross-communication dynamic is what appeals to Bosetti in this situation which he has set up. I would interpret it as a metaphor for all human communication; we’re all acting as transmitters and receivers, sending out messages in one language and decoding them into another.

On Campanas, Bosetti revisits Gomera some six years after he did the Whistling Republic piece. This time he took with him some of the unprocessed recordings from the earlier piece, and replayed them back into the air as he wandered around the island, looking for “acoustically interesting spots.” Sounds layered on top of other sounds. He re-recorded these sound events, and edited them into the suite we now hear on this 2009 piece. His own voice appears on the set; he speaks of returning to the island and giving something back, after he previously took something away. He writes, in his printed text, of “putting something inside a space in order to hear it”, making an observation perhaps about the nature of acoustics, but more likely an observation about the importance of context. He also draws, in yet another attempt to make himself understood, and the tentative doodles on the cover here illustrate some of the fantastic things he saw on Gomera; some of them are re-asserted by his vocal descriptions of them on the recording, and he states with some conviction that he “wasn’t dreaming” when he saw a man with two donkeys disappear into the clouds. Other magical-realist fragments emerge through the richness and wizardy of these recordings, and it’s a record that casts a compelling spell over the listener with its imaginative recasting of field recordings, forming uncanny broken narratives and rich atmospheres. Excellent.