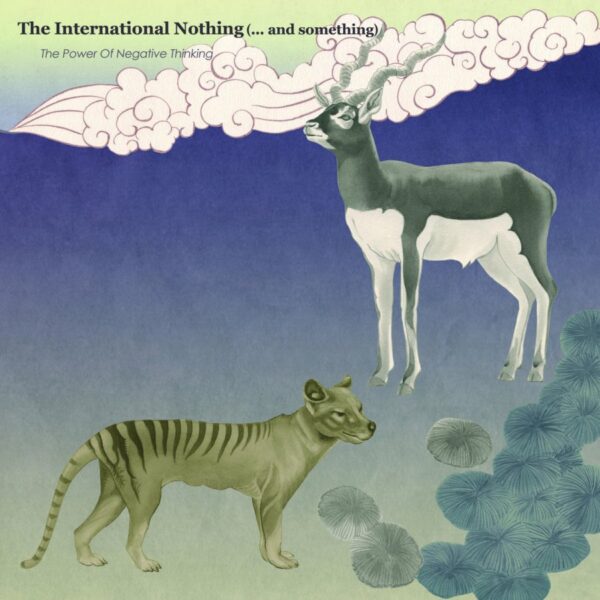 Previously noted The International Nothing on their 2014 CD, The Dark Side Of Success for the Japanese Ftarri label; the twin clarinets of Kai Fagaschinski and Michael Thieke impressed our reviewer S. Marshall with their “enclosed, extraordinarily long-winded exercises”. We’ve also encountered Kai a few times over the years, for instance in various improvising combos represented on the Mikroton label, and most oddly of all as half of The Dogmatics with Chris Abrahams. If Kai’s in the room, you can guarantee a brittle atmosphere, that much we know…and the same observation applies to The Power Of Negative Thinking (MONOTYPE RECORDS mono086), a record that you could eat like so much peanut brittle. In this project, Kai & Michael team up with Swiss bassist Christian Weber on his double bass and the German player Eric Schaefer with his drumkit. Because of this addition to the group, they call themselves The International Nothing (…And Something) for this release, acting as though all of Europe will be amused to death by this layered and intellectual in-joke.

To give you some idea of what this ingenious record is like, it seems by now Fagaschinski and Thieke are being labelled as a “psycho-acoustic” duo. What in the name of Iain Sinclair does that mean? Well, it might be something to do with their deep understanding of sound, the business of producing multiphonics through their woodwind sticks, and exploring the dark realms of “difference tones”, also called “combination tones” – the “third” tone that sometimes appears when in fact there are only two sounds being created. For further information on that phenomenon, see the studies of Giuseppe Tartini in the 18th century.

What this means is that the record is one of slow, very deliberate musical utterances. It’s as though the musicians were actors in an incomprehensible philosophical play, each given lines of enormous import to recite. Then they had to say them in a foreign language as well. And deliver them underwater. While wearing a suit of armour. And any other handicaps that spring to mind, that might obstruct ordinary, linear thinking or direct performance. It isn’t to say the music is heavy-footed; it’s just very considered. Every musical phrase might seem to arrive wrapped in quotes, but they are very beautiful phrases; not a commonplace remark in sight. When you’re occasionally rewarded with a brief harmonic passage in amongst all this stiff awkwardness and formality, it’s like a treat of sugar-coated fruits.

The only time the quartet are allowed to loosen up and have some rollicking fun is on ‘Something Went Wrong’, which anywhere else might be seen as an attempt by a school band to play Kurt Weill for an amateur production; in this context, it’s practically a relief to hear some syncopation after all that staid grace, no matter how stilted it may seem. Mind you, the bassist and drummer also get to shine on ‘We Can Name You Their Names’, which seems to be the apogee of their “Morton Feldman meets the Modern Jazz Quartet approach”. What poise…and if you want to hear what Eric Schaefer can really do to liven up the party with a pineapple (and we’re talking fragmentation hand grenades, brothers), check out ‘Lokale Gebrauche’, where his percussion stabs ring out like tiny gunshots.

From all the above, I need hardly point out how appropriate is the cover illustration, depicting each member as a wild beast of some sort, each from a different continent, and none of them doing much except standing there looking replete and fine in their various pelts. Obviously, the anteater represents one of the clarinet players, but I’m still trying to match up the other three. From 14 July 2016.