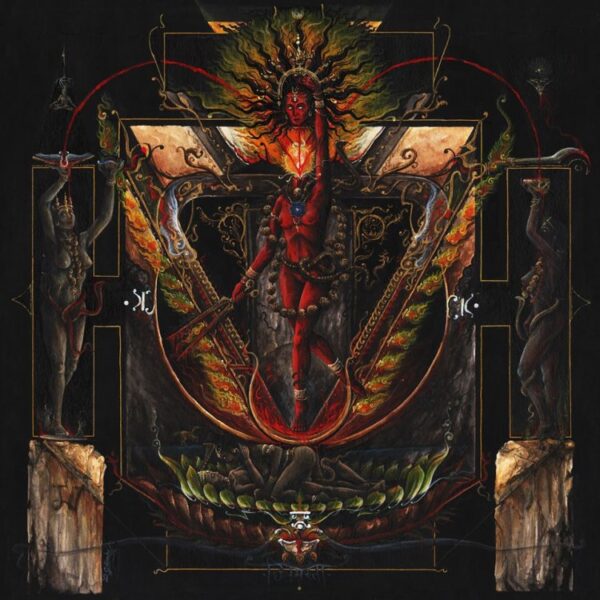 Judging from the very ornate cover, I presume this mini-album is a celebration of the Tantra Hindu goddess Chhinnamasta – there’s even a track “Chhinnamasta Mantra” which as it says includes the mantra that Tantric devotees chant to attract women – and all that she represents: death, self-destruction / transformation, renewal, sexual energy. In short, the album celebrates the duality of existence: life / death, and the energy that binds it all together. Chhinnamasta the goddess is usually represented as a nude, self-decapitating goddess holding her head in one hand and a sword in the other, with blood spurting out from her neck to be captured by her attendants, and that’s the spectacular sight that greets potential listeners and separates the brave (and maybe the foolish) from the fearful and wary.

As it turns out though, the music is very epic in scope and exhilarating in mood. Its sound is probably a bit too thin and the drums too tinny to do it and its subject matter full justice. The band relies heavily on orchestral synthesiser backing to fill out the music’s sound when a guitars-n-drums set-up, with the appropriate production, could have been enough. The slavering vocals suit the music but reverb robs them of their full horror potential. The music runs the gamut from symphonic to classic minimal BM, melodic post-BM and even shoegazer BM in parts.

The one track that really stands out is the jangly “Chhinnamasta Mantra” for its female vocal chanting the mantra against an accompaniment of shrill jewel-toned guitar, background ambient effects and hand drumming. This has a very beautiful psychedelic sound and the mood is trancey and dream-like. Too bad it’s not long enough and seems to peter out just when you think it should dissolve in a shower of guitar and ambient sparkle effects. While the rest of the album charges with loads of spitfire fury to spare, the songs don’t differ from one another – though I suppose the concept of the album suggests they should all relate to one another and not be too individual – and if it weren’t for non-BM melodic touches like acoustic guitar or sitar in parts, the music would be very monotonous.

Shortcomings aside, this EP is very enjoyable if heard as one continuous work rather than as a set of four songs. Some time in the future it could be reworked with longer trance-like psychedelic music and with a better sound and production so that it celebrates all that Chhinnamasta represents in all her contradictory dualistic glory.