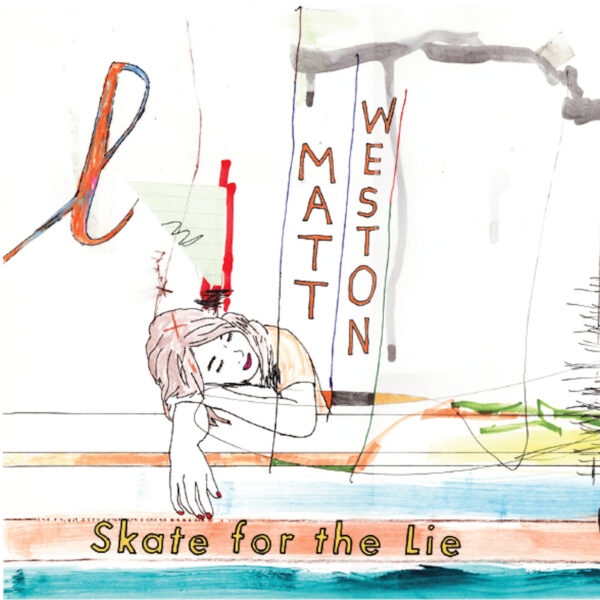 Impressive record by one-man American powerhouse Matt Weston on his four-track release Skate For The Lie (7272music#009). I was interested enough to browse his back catalogue, much of which seems to consist of self-released items on his own 7272 Music label, and without hearing them I do have the impression that Skate For The Lie is just a tiny glimpse into what this fellow is capable of. He credits himself with just percussion and electronics, but there seems to be so much more going on in just these four short tracks, many more instruments at work. On ‘You’ve Got That Song’ he sounds like an entire band, performing some wayward brand of outer-space funk-rock noise. There’s also the intense over-crowded explosions on ‘The Old Man With The Burning Eyes’, where it’s like about two or three punk rock bands having a friendly punch-up in a sweaty basement. Real energy music, and “maximal” in a way that I enjoy tremendously, by which I mean there’s no time wasted with wispy nuances of drone and fiddly digital manipulations.

What exactly is Matt Weston doing? I’m not sure. This particular release, we are told, “features multiple realisations of architectural site-specific electroacoustic notation”, a sentence that begs at least three pointed questions. Notation? I’m prepared to believe he’s a composer of some sort, but this stuff comes across as so spontaneous, so very much of the moment, that it’s not immediately obvious to me at what point he pauses to look at the music score. Admittedly, ‘Tarrings and Featherings’, a stark piece of restrained but strong drumming, resembles avant-garde percussion music in places, but there’s also a lot of hearty scrape-and-bang malarkey that would terrify most classical timpani players. ‘This Machine Kills LRAD’ is even more stark, but has bursts and eruptions of electronic noise that you could use to dig up half the pavements of Manhattan. If that’s Matt Weston’s notion of “electroacoustic”, I’ve no complaints, but it’s a long way from INA-GRM, Clyde. As to the claims about being site-specific and having some connection to architecture, I’m at a loss to explain, but one does feel a certain grandiosity in these hefty, industrial-ish, man-sized blocks of noise and sound, as if one were being overshadowed by the tower blocks of New York. He doesn’t mess about and he gets straight to the point.

If we put aside these abstracted ideas about music, we should also note this album “explores themes of loss and defiance”, which may refer to some personal crisis in the life of this Chicago-born musician who currently lives in Albany. The title, and Jeremy Kennedy’s cover art, remain a little obscure, but I could say the same about many of the other intriguing titles in his catalogue, such as Kidnapping Denials or The Last Of The Six Cylinders. I do like a musician who evidently dreams of being mistaken for Herman Melville one day. Lest you think Weston is some undiscovered lone genius, in fact he’s got friendly collaborators by the dozen – there are ample instances of his collaborative work with other bands, singers, improvisers, rockers, jazzers, and avantists of all stripe, a resume of which would probably leave you feeling quite sick. Two regular gigs to look out for are Arthur Brooks Ensemble V, and Arc Pair, a duo with drummer Amanda Kraus. Many thanks to Matt for sending this. There’s also a cassette edition available as Tape Drift Records TD76. From 3rd August 2016.