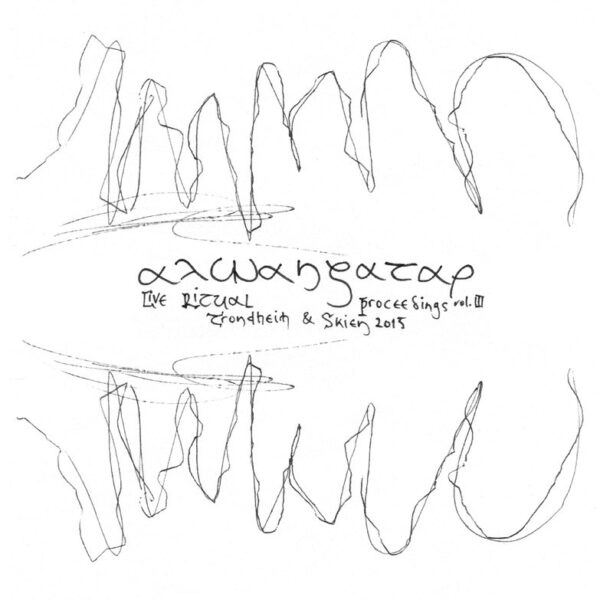 Here’s another solo cassette by Alwanzatar, Oslo’s one-man version of Gong, whom we last heard in May 2016 and his tape Archaic Mysteries Of Ecstasy. Where that release featured a lot of ritualistic mystery chants and strange archaic vocalisms, Live Ritual Proceedings Vol. III (UNDERJORDISKOTEKET UJD 005) is more musical and showcases his skills on a range of droning synthesisers. Among these are vintage instruments such as the Arp Odyssey, the Moog Minitaur, and the Korg SQ-1, fit to make any collector of retro keyboards fall to their knees in envy. Alwanzatar however doesn’t neglect the drum machine, and his approach to cosmic space drone is enabled considerably by the mesmerising rhythm patterns which he programmes into each performance. Accordingly, both these side-long performances from 2015 are compelling and enjoyable voyages into outer galaxies; where Hawkwind would have travelled to the same places in a huge inter-galactic cruiser with 18 stories and thousands of passengers on board, Alwanzatar gets there in his personal flying flivver powered by a single motor, enjoying the views of astral splendour outside his perspex dome. Even the cover art with its simple drawing and hand-lettering attests to this creator’s modest ambitions. While this may not be essential listening, I like the simplicity and directness of Krizla’s music; the sounds are good, there’s a clarity to the performance and its intention, and he remains dedicated to completing the task, no matter how long it takes. There’s also a strong sense of optimism and positive vibes from these cosmic drones. Very good. From 19th August 2016.