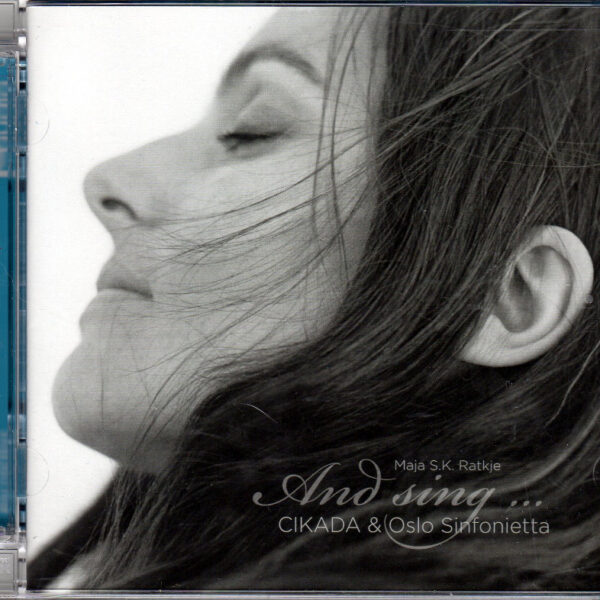 Another release from the Norwegian label 2L (Lindberg Lyd) again spares no expense in bringing us the work printed on a Blu-Ray disc and an SACD in a single package. This time it’s a new work by Maja S.K. Ratkje, our favourite Norwegian genius all-rounder, who has now set herself the challenge of composing new music that showcases her own voice, as as she puts it “include my sound as a voice performer”. In case you need reminding about her skills in this area, we have noted a few examples of her astonishing work as part of the all-female group Spunk, for instance on Das Wohltemperierte Spunk, Adventura Botanica and Live In Molde, not to mention her work with Slugfield, and on Treasure Hunt…but it’s one thing to do the voice extemporising thing in a free-improvisation context. Today’s record, And Sing…(2L-124-SABD), shows the possibilities afforded by performing with the Oslo Sinfonietta and with CIKADA, an Oslo-based ten piece chamber ensemble led by Christian Eggen.

The second piece on the disc, Concerto For Voice (Moods IIIb) has its origins in an earlier piece from 2004, in fact her first composition for working with a large ensemble and pitching her voice against it. This was commissioned by Radio France; she solved one basic problem by amplifying her voice, so it could be heard over the orchestra. But it also allowed to play with the differences between acoustic and amplified music; if she could make her own whispering be heard against the sound of a loud orchestra, it might go some way to “explore the mismatch between what one saw and what one heard”. Ratkje revisits the piece for this recording; she tells us about the elements that form the composition, which include “spectral chords”, which she arrived at by analysing the sound of a tenor saxophone; and a motif based on certain common frequencies found in multiphonics. On top of this “harmonic backdrop”, we have orchestral noise and percussion doing its best to interfere with the smooth progress of the piece, and introducing rhythmic patterns.

This dry description tends to confirm that Ratkje sees composition as a way of handling forms and putting elements in the right place. What’s interesting to me here is that she would say she’s doing traditional composition, following the “orthodox form” for a voice concerto which simply pitches a soloist against an orchestra. It doesn’t quite prepare you for the wild and eerie sound of Concerto For Voice (Moods IIIb), whose dynamics are extreme and whose contents are explosive; the orchestra sways and flies around like a gigantic atonal beast, an ancient sailing ship fully-rigged with a cargo of unknown dimensions. Maja’s contributions to the controlled storm consist of strangled gibberish and throatal squawks…unbearably high-pitched squeaks and howls…and sometimes more contemplative murmurs, introverted sighs, and wordless expressions of emotion. To round it all off is the sound of a typewriter being used on stage as a percussion instrument, clacking in at certain quieter moments. But also it’s used with the express intention to say something about the human voice itself; she sees that typewriter as her “sidekick”. What does that mean? Perhaps she’s inviting us to read its mechanical chatter as a form of speech. Or a machine producing letters and words, that are on the way to being vocalised.

It really is an astonishing combination, both as a technical tour de force (her impeccable vocal skills) and as an intense musical experience, which at times borders on the terrifying. I have the impression that Stockhausen, himself no stranger to using voices and choral music, would have given his right arm to arrive at such a successful formalised expression of ideas as this. He could have got there, but it would have been a lot of hard work on his part, writing, composing, thinking. I don’t know much about Ratkje’s working methods, but this music feels natural, unforced; I’d like to think it comes to her quite easily.

The disc contains another long piece “And sing while thou on pressed flowers dost sleep”, a detailed analysis of which defeats me at the moment. My superficial impression is that it’s no less complex and demanding than the above, and it seems bent on slowly winding up tension in the listener to boiling point. All I’ve gleaned from the notes is that the voice element is done by loudspeaker playback (Maja herself was not present) and that the title comes from Shakespeare, though that may not be important. It may seem at first glance that is music is more about form than content, but I’m not sure that’s the case; I think meaning, emotion, and depth just pour out of Maja S.K. Ratkje, whether she’s performing or composing, but (unlike some windbag male composers of the 20th century) she just doesn’t feel the need to explain it to us in words.

As with the other 2L release, the exceptional quality in the sound recording and playback is well worth your attention, and hopefully may set a new benchmark for the recording and pressing of classical music releases. From 8th August 2016.