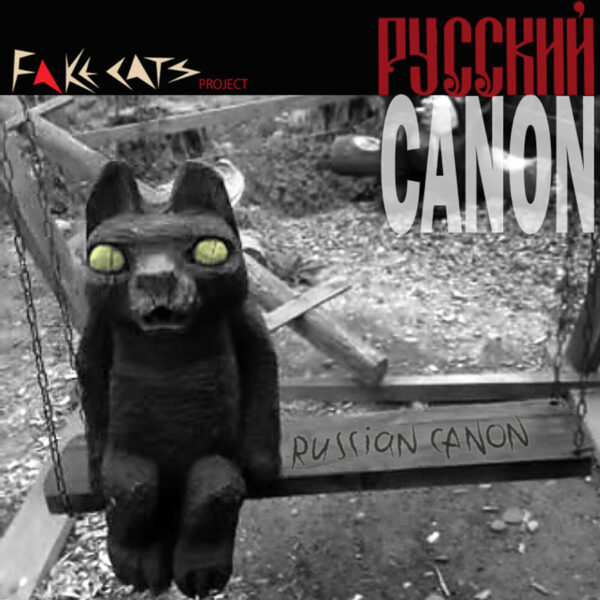 A real one-of-a-kind record is Russian Canon (FROZEN LIGHT FZL 037), a record credited to Fake Cats Project, a trio featuring Kirill Makushin, Igor Levshin, and Alexei Borisov, which they only started in 2015 yet they’re already produced four records, of which this is one. Can’t find out much about the project or the band, although Alexei Borisov is well known and respected on these pages, and is probably my favourite avant-garde Russian musician (along with Kurt Liedwart and Ilia Belorukov).

Russian Canon is a bizarre suite of songs and instrumentals which may amount to an opera, a song cycle, a parodic comment on modern urban society, or simply a series of surreal poems set to music. All is sung (and lyrics printed) in Russian, so I’m at a bit of a loss, but at least the titles are printed in English. You might be able to piece together a scenario from titles like ‘Falcon Theme’, ‘Clouds Of My Memory’, and ‘A Kitten Looks At Soldier’s Eyes’, but it’d be a pretty wild and hairy screenplay that you’d be submitting to your editor. The music is kind of all over the place too. I can discern tunes and ditties that might be Russian folk songs (a wild guess though; the accordion backing is my one and only clue here) and likewise songs that more resemble the sort of proletariat anthems that appear in my worst nightmares when I’m inventing newsreel footage from the days of Kruschev and Sputnik and screening these imaginary movies in my brain. Particularly the opening blast, ‘Everything Is Fine’, a fractured every-which-way composition whose waywardness makes it perfectly clear that whatever else is going on, everything is not fine. But that’s just my warped imagination.

The trio also play electronic synth drone tunes; a very distorted form of easy-listening jazz with the help of guest trumpeter Konstantin Sukhan, acting as the reverse Herb Alpert in this context; broken, minimal post-punk songs; and even on one track a song built on a famous Erik Satie tune, so that’s their classical music credentials also checking in for duty. Fake Cats Project perform in all these styles effortlessly, and are not attempting a mannered pastiche…and they play with utter conviction, maintaining a serious and slightly gloomy mood throughout the whole off-beat performance. Street singers and “baggers” – hopefully that’s the local slang for bag-men – are also sampled and their voices join in the rollicking fun in places.

It’s a remarkable tour de force, packed with much drama and musical invention. Now that I think of it, the nearest Western equivalent to this might be Tom Waits, but even he would probably hand over his last bottle of brown-bagged bourbon if he could produce something as cinematic, noirish, and unhinged as Russian Canon. Wish I could decode more of this, so I may just have to send a message to the band through their Bandcamp page. Very high recommendation for this lavish, layered, musical oddity. From 7th September 2016.