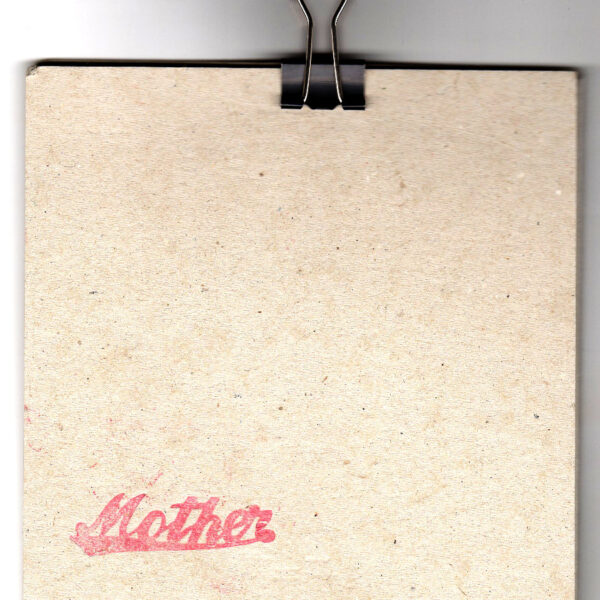 A very dense and opaque piece of experimentation indeed is The Process (EVERY CONTACT LEAVES A TRACE), a record which arrives with next to nothing in terms of contextual information. I’ve got the word “mother” stamped on the card covers, an insert of a family snapshot, and the titles printed on clear acetate. It’s a collaboration between two Chicago artists, the Afro-American poet Marvin Tate, and the sound artist Joseph Clayton Mills. Actually even labels such as “poet” and “sound artist” don’t really do them any favours, as they’re both creators with many outlets – Mills also does sound installations, paintings, and is a writer; indeed some of his compositions are text-centric in nature, so he mixes things up. Tate is a sculptor, painter, maker of objects; composer of music and performer in a funk band called D-Settlement; and a performance artist. They’re pretty much overflowing with ideas. Even a glimpse at their respective websites will overload the reader with a wealth of interesting and allusive ideas. I suppose we could broadly characterise Marvin Tate as a restless and agitational creator, a declaimer of straightforward poems and texts that are not exactly confrontational, but neither are they designed to let society off the hook very easily. His visual art is building on the turf carved out by Jean-Michel Basquiat, yet also harking back to the Chicago imagists and reclaiming elements of so-called “ethnic” art into a space where he can articulate its meanings on his own terms. As for Mills, he’s composed and released a number of pieces in the trio Haptic with Steven Hess and Adam Sonderberg, one of which (Scilens) we noted in 2012.

I would make much the same sort of observation as I did then, when I was baffled by the music’s “inscrutability”. The Process does nothing to explain itself. It’s an inspired and free-wheeling mix of music, sound art, spoken word and white noise like off-tune TV sets or broken radios, with added sound effects, field recordings, and probably even more elements than I can conveniently fit in my shopping cart just now. If there’s a narrative at work here, or even a basic plan, it’s hard to fathom out; there may be titles to the nine sections of the work – assuming it is a complete work split into nine episodic parts – but they don’t reveal a great deal. Themes bubble to the surface, however, and The Process may have something to do with memory, a search for identity, an understanding of the process of artistic creation itself. If these are indeed themes, they’re posed as questions rather than set out didactically as blocks of information, and it’s incumbent on the listener to pay attention and start to do some research / thinking of their own. Fragments of information leak through, and these we must use to piece together a map. It’s probably not inept to use Marvin Tate’s poems – and other texts, which seem more like informal documentary records of him engaging in a conversation, or simply rambling to himself – as incomplete signposts to an unfamiliar city.

I am certain there are some deep messages embedded in this lumpy and confusing fabric, if I could only dig them out. Even if you have no interest in searching for buried treasure or decoding crossword clues, then The Process still remains a fascinating listen, by turns beautiful, haunting, and abrasive, and it’s a sound-art journey you’ll want to take more than once. From 29th September 2016.