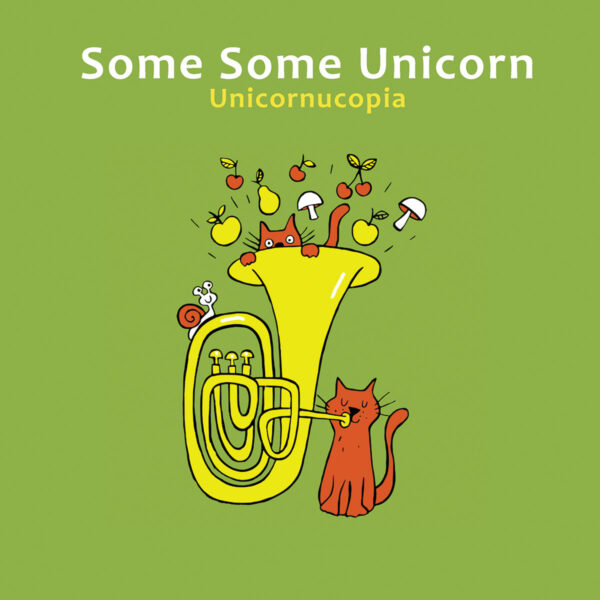 Some Some Unicorn are a small army of free improvisers, and on Unicornucopia (CLUTTER MUSIC CM023) I counted at least 40 names before I ran out of fingers and had to buy a new abacus. It’s a pretty healthy gender balance, too; a lot of women musicians in the group. Shaun Blezard is the mover and shaker that’s mustered this army, a fellow whose background is electronica, samplers, laptop and dance music, so it’s interesting to find him masterminding this project involving real human beings instead of machines, and music that’s mostly produced by acoustic instruments. That said, there are a large number of players credited with electronics on this record too.

Some Some Unicorn started online as a collaborative thing; now they see themselves as a collective, or even a small community, of like-minded souls who value real experience over dwelling in the virtual realms of Facebook likes and Twitter responses. The music here was recorded in a number of venues through 2016, in Salford, London, Lancaster and Ulverston; Blezard did a lot of the recording, and mixed and mastered the release itself. I’m already daunted; I feel like these 40+ energised souls have a lot of material in the pipeline, and this diffuse and sprawling record represents only a smattering of the things they are capable of doing. It would be a bold man indeed who would try and categorise the music on offer, since it’s so diverse; although you may think you can recognise elements of “traditional” free improvised music here in the free sax and trumpet blowing, there’s also drone, choral music, percussive meditational tunes like some form of souped-up Tibetan bowl music, classical chamber music, and even a species of folk tunes. Quite often, three or four of these styles and genres are blended freely on the same track, the musicians doing so in an entirely unselfconscious manner. It’s not a forced mash-up, more a natural melding of forms and expressions.

Even though not everyone is present on each track, it’s still impressive to get this many people together and not end up with a muddy, shapeless cacophony. Indeed, the simple clarity and directness of the music is one of the hallmarks of Some Some Unicorn; without trying too hard or over-intellectualising the idea of “freedom”, they’ve ended up creating music that’s arguably more free than many well-known hardcore improvisers can manage. There’s a real open-endedness to this music which invites the listener to enter and join in, rather than shut them out; and the players themselves are clearly enjoying making their explorations, which take place in a very friendly and collaborative place. That’s rare. But real unicorns are rare too. One of the benchmarks we’re reminded of is the Spontaneous Music Ensemble, which is a very apt comparison, and in particular I would suggest those voice-choir experiments John Stevens conducted in the early 1970s, such as For You To Share (which featured untrained members of the audience joining in). I’m also reminded of Cornelius Cardew and The Great Learning, though thankfully this album Unicornucopia is entirely free from Marxist and Maoist dogma of any sort, nor does it follow the wearisome and stultifying trajectory of Cardew’s old warhorse of a piece.

While some of the wordless vocalising may seem a little “arty” in places, for the most part this beautiful record is a total delight, injecting new life into a genre which has lately seemed in danger of becoming stultified and crippled by its own history and baggage. Mr Blezard, and all the musicians named on this record, can feel proud of this achievement. From 23rd September 2016.