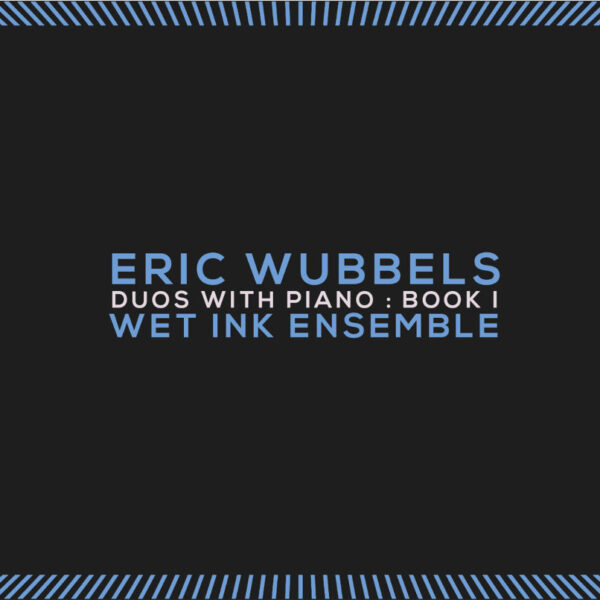 Superb set of compositions by the American composer Eric Wubbels is called Duos With Pianos Book I (CARRIER RECORDS CARRIER 030). We’ve received many release from this New York label Carrier Records and enjoyed every one of them. Members of Wet Ink Ensemble, previously noted in these pages for their work with Sam Pluta, accompany pianist Wubbels on this set of compositions dated from 2007 to 2014. The press notes characterise Wubbels – who happens to be co-director of Wet Ink Ensemble – as “a rare virtuoso of extended piano technique”, and there’s abundant evidence on the grooves that follow. But he’s also a hyper-intelligent composer with a conceptual depth that enriches every one of these pieces.

For instance ‘Shiverer’ – a compact but dense explanation is given in the CD notes for this equally dense music. It’s something to do with “relationships between the instruments” and the way they play. Piano and flute in this case. Right away it’s clear Wubbels is a composer who understands how instruments actually work, and the extremes to which they can be pushed, an adventurous spirit we’ve been missing since the time of Charles Mingus. Wubbels admits this is a “dfficult” piece, but the main problem for players is the complex co-ordination of ideas and actions which they have to achieve. In these eight minutes we’ve got a rich flow of traffic, of ideas compressed into notes, and the sparks fly when one or more of these bundles intersect. Further, Wubbels has the notion that he’s making the musicians pass through “a series of gates” – a metaphor which would please those who like to interpret Mark Rothko’s paintings in that way – and through technical skill and mental effort, a spiritual epiphany may be reached. Whew.

‘The Children Of Fire Come Looking For Fire’ arrives in two long parts. Scored for violin and prepared piano. While previous piece seemed like it could almost pass for very advanced 1960s classical avant, this one owns up in its opening seconds to its contemporary “noisy” influences. Josh Modney’s violin scrape throughout is intense – acoustic Merzbow on the cat gut! Rarely heard such wild atonal screeches on that instrument. But this sound of his didn’t just “happen” one fine day when they strolled into the recording studio; rather it’s the result of months of planning, rehearsals and hard work which Wubbels instigated. It earned Modney a printed dedication; one senses it was a painful process for him. Apparently this piece is derived from a small section of a Brahms piano piece, where Wubbels has zoomed in on a few precious seconds of music and used its form as the basis for an entire compositional structure. To put it another way, he’s taken what he calls a “contrary motion wodge shape” from Brahms and repurposed it into these 25 minutes of astonishing music; I can’t understand more than the gist of his explanatory notes, but once again it feels like he’s pushing something to the utmost limits, when he speaks of a “neume that functions on every structural level…from global trajectories to micro-gestures”. This approach seems very comprehensive, and no doubt accounts for the remarkable richness of ‘Children Of Fire’’s content; it’s like reading a thick 400-page treatise on an abstruse subject, and quite often the challenging ideas are presented with tremendous speed. Yet it’s not incoherent or disjunctive; even though highly structured and near-abstract, this comes over as a very convincing argument, thought-through from start to finish.

‘Doxa’ is another two-parter, scored for prepared piano and prepared vibraphone. Only the most minimal of notes are supplied by Wubbels for this mysterious piece; almost like two lines from a modernist poem. Part I = (mind cannot be grasped). In stark contrast to the busy-ness of the previous pieces, Doxa part I is a blank canvas occasionally decorated with bursts of light and colour from the two percussion instruments, chiming into the silence as if reluctant to disturb the stillness of the atmosphere. The carefully-programmed silences in this piece give us a chance to breathe, finally. True to its title Part I does convey something of a mental problem which can’t be solved, a philosophical investigation into a metaphysical conundrum. Part II = appearances/phenomena. Even more restrained than its brother, but at least the sound it makes is continuous, a beautiful limpid near-drone of crystal-clear music which slowly grows in richness and complexity. With its relatively limited range of notes and the repeated patterns, ‘Doxa Part II’ is like Morton Feldman enriched with vitamins and power drinks.

Lastly, the 20-minute ‘This Is This Is This Is’, two alto saxophones with a prepared piano. Dedicated to the writer David Foster Wallace whose thinking had quite an influence on the composer Wubbels; indeed he’s decided to try and articulate, in music, a particular type of consciousness that was propounded and advocated by Wallace. It’s something to do with moving beyond the habits of thought patterns which we all accumulate in our lives, and also trying to transform everyday life into something sacred and meaningful. Certainly ‘This Is This Is This Is’ does seem, in places, to zip by at the speed of thought, and there are no end of repeated patterns in the music. A sense of struggle is conveyed, Wubbels trying perhaps to break free from the very shackles of his own ideas. “Extended repetition as a force against habit,” as he would have it; and if this music doesn’t represent a significant advance on the repeated arpeggios of Philip Glass and Steve Reich, then I’ll eat my hat. From 7th October 2016.