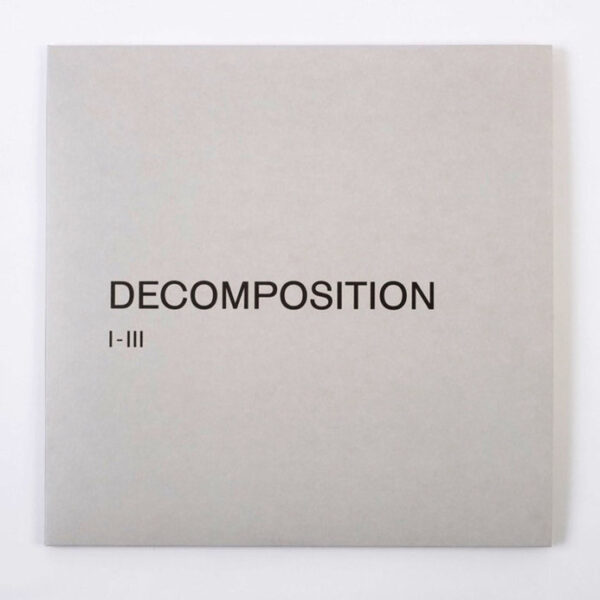 Ambitious piece of modern sound art by Peter Kutin (last noted in these pages for a split record with Asfast) and Florian Kindlinger in the shape of Decomposition I-III (VENTIL V0001)…this particular item emerged as a double LP on Ventil in May or June 2015, but for some reason we did not receive a promo copy until 3 October 2016. In one sense this might not matter, as the complete suite of Decomposition has been growing and evolving for a few years now, its separate parts presented at various European festivals and art centres since 2014. This double LP is the best way to get the narrative of the piece though, as it leads the listener through a three-part travelogue of internalisation, self-examination, and alienation, probably leading to some profound form of metaphysical despair by the end of it.

The story is told over four sides with the titles ‘Absence’, ‘Introspection’ and ‘Illusion’, and the plan is to subject the listener to some pretty harsh and bleak environments which they must endure, forging their soul on the anvil of endurance. “Territories antagonistic to human life”, is how they would describe their choice of surroundings. It’s kind of like field recordings, because the basic sounds were captured in places like a desert, a snowy waste, a glacier, and an abandoned mining village with wind blowing a howling blast…in these extreme zones, they find the existential misery they are seeking to capture. But they also argue that “field recording” is a “moribund” genre in any case, and they’re out to change all that with their radical new approach to pushing recording gear and microphones into places they’re not supposed to go. We’ve got to admire rough-tough artistes who are prepared to throw down the gauntlet with this kind of reckless thinking, and Decomposition I-III has a lot going for it in terms of the vivid and stark nature of its sound surface. I also like the very contrasting clashes between nature and civilisation that are reduced here to extremely simplistic arguments, the better to bring home the intended messages about estrangement and the searching questions about mankind’s place in the world today.

Christina Kubisch is credited here too, though she worked only on side four, the 18-minute ‘Illusion’. For this she was commissioned to record “electromagnetic signals” from the city of Las Vegas, later to be reprocessed by Kutin in the studio using just edits and splices. The plan was to use Las Vegas as a gigantic form of synthesizer, the entire city unwittingly participating in a bizarre sound art experiment. The artists speculate on the fact that Las Vegas used to be a desert not so long ago, and presumably this makes it fair game for inclusion on the set, conceptually linked to their other recordings of hostile terrains. That den of gambling and vice certainly sounds bleak and remote here, reduced to a series of clinical robotic pulses and whirrs. Bizarrely, in places, the piece turns into something resembling 1990s glitch or avant-garde techno with its mechanical rhythms, but this may simply be a by-product of the process. ‘Illusion’ won the Karl Sczuka prize for best radiophonic composition of 2016, and well-deserved too.