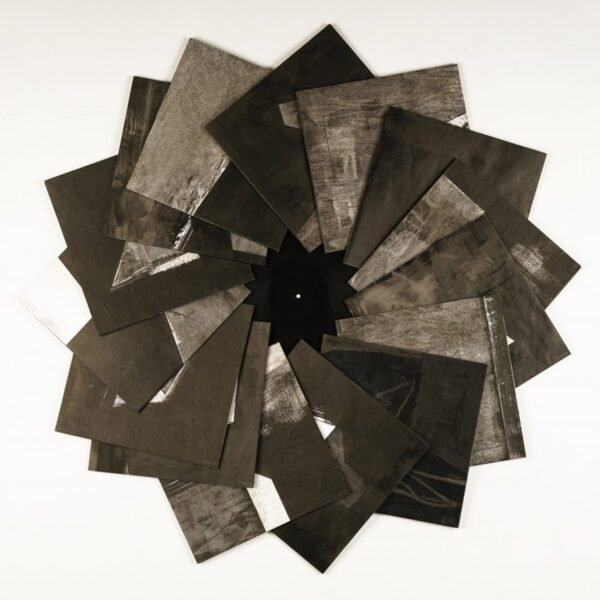 We have not encountered the work of sound artist Manuel Knapp before, but this Vienna and Tokyo-based fellow has a few scattered releases of electronic noise to his name dating back to around 2008, some of them in conjunction with Tim Blechmann. His LP Azoth 1 (VENTIL RECORDS V0004) does indeed contain some powerful blasts of ear-splitting, scorching noise, but he does it in a very structured and composed way, tempering the extremes with other textures, layers, and moments which are almost melodic in their approach. In this instance, he’s working entirely within the computer, radically departing from his analogue noise roots to experiment with the digital realms. Azoth is realised with freeware plugins for manipulating digital audio, by which I suppose is meant filters and processing tools and digital synths, some of which might even be downloadable from the web. It’s Knapp’s plan to push these tools to their limits, using them for purposes which their authors did not intend.

I’m happy to report Knapp does a very good job of this. While the opening moments of Azoth’s side A were rather irritating – where the limitations of the puny digital tools were clearly exposed – by the end of Side A, and throughout Side B, he’s cheerfully demolishing the world around him as we wallow in a gloriously wild and unfettered orgy of bombistas. Manuel Knapp certainly has his own authorial signature, which is not easy when we’re dealing with the many variant poisons of harsh noise that glut today’s market; it may have something to do with his attention to structure, the use of extreme dynamics, the deliberate programming of musical elements and root-note drones, and a very adventurous spirit when it comes to manipulating these chunks of digital audio and freeware tools. He’s like a bull in a paintbox, a kid in a Play-Dough factory, and a pair of eyes without a face.

I’d like to recommend this album as a product you can rush out and buy, but I’m not sure if I can. To begin with, it costs 666 Euros, a high price which reflects the fact that there are only 15 vinyl copies available for sale. Each one does have a hand-made work of art for a cover, but even so…and why invoke the “number of the beast” for a record which, although noisy, has no discernible satanic connotations? At the hour I write these lines, 5 copies of the vinyl are still available, though I’m mystified as to why the label wish to tell us that this particular pressing and retail deal was their “fastest break-even ever”. Why the heck should we care about their business plan? For those of you disinclined to spend such a high figure on one record, it is possible to hear some of Azoth on their Bandcamp page. Peter Kutin, who is well represented on this label, assisted with the mixing and mastering. From 3rd October 2016.