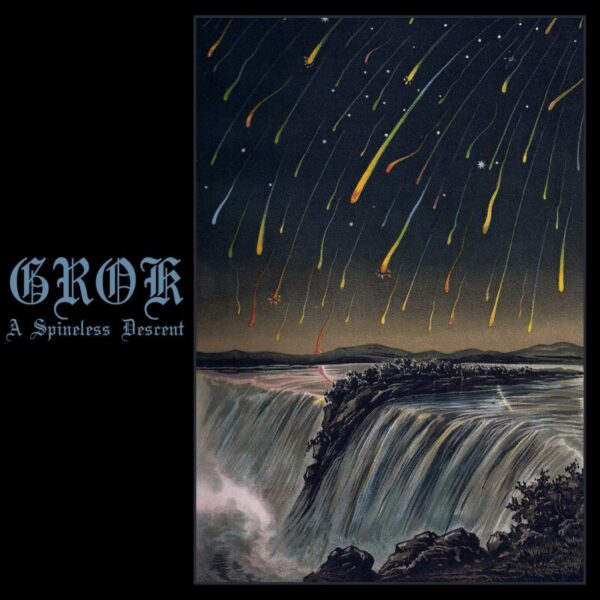 For those of us who miss the sprawling and darkly hypnotic music of Light Shall Prevail and Njiqahdda from years ago, the fellow behind those bands and E.E.E. Recordings, E Henderson, has resurfaced with a new project Grok that also features a second member, known as CJH, on vocals. Grok sounds superficially similar to those past projects though the duo’s style is less noisy and is more spacious with a much greater emphasis on keyboard-generated atmospheric tones and effects. Dare I hope that Grok heralds a return to the glory days of Njiqahdda of a decade ago?

You need to play this album a few times to appreciate its atmospheres fully: yes, they are dark and very spacious, and filled with deep and complex emotions that seem to range from anger to despair and grief. Who knows from what cause such feelings have arisen? I have the impression that they arise from the disappointments that life metes out to us, from dashed expectations and loss of faith in the things and ideologies that we thought would guide us to spiritual fulfillment. In the place of these dashed hopes are disillusionment and a sober realisation that life and the universe are far more complicated, less benevolent and much more remote than we realise. We have only this planet as our home and ourselves and our fellow animal, plant and mineral travellers as our companions and sources of comfort and connection. The music ranges far and wide in the cold frigid darkness generated by the synthesiser wash and tone effects, the distant phantom growling vocals following where the melodies and percussion go.

The eight tracks are not all that distinctive in themselves and form a long soundtrack to an imaginary film of mesmeric dark psychedelic landscapes wherein dwell ghosts and spirits who might have inhabited our physical universe aeons ago, and have ascended (or descended) to other planes of existence. Drums and shifting keyboard ambience dominate, achieving a somewhat paradoxical effect in which melodies and riffs definitely exist yet if you try to concentrate on any one particular passage, the music ends up sounding formless. It goes where it will and the apparent lack of direction might frustrate listeners. Guitars have a very sparing presence though they do give the music a tough and forbidding aspect.

Perhaps the music could have done with some editing for length as parts do get repetitive and I admit there isn’t much Grok brings in here that wasn’t done previously with Njiqahdda. The vocals don’t stray far from their ghostly rasping tumbleweed style. While the album is great for icy atmospheres, listeners expecting more will be disappointed – within those deep spaces, there are more ghostly apparitions, deeper caverns of negative sound, like a never-ending chain of doors along a corridor opening onto more doors ad infinitum. But if you are happy to be immersed in deep hypnotic trance ambient black metal psychedelia, and are not asking for more, this album will satisfy you.