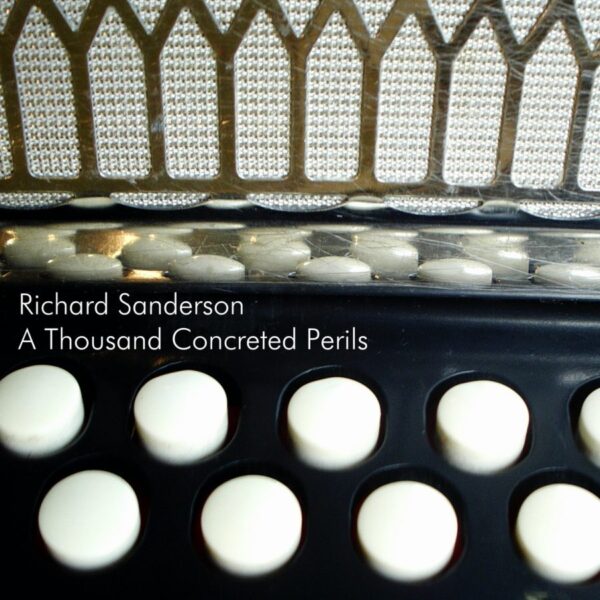 The lovely Richard Sanderson is here with A Thousand Concreted Perils (LINEAR OBSESSIONAL RECORDS LOR081). It’s been three years since he last turned in a solo concertina record (Air Buttons), and now here are a further 11 experiments where he applies a mixture of methods to change the sound of the instrument, open up new avenues for exploration, and generally push at the three corners of the envelope. Technically speaking, he does it with FX pedals and feedback, and even the use of computer software to manipulate sound, but it’s also clear from the enclosed notes that his mind is in a thousand diverse locations as he negotiates these thousand concreted perils. In a few terse sentences, he speculates on the joys of note-bending, he likens his bellows to a pair of lungs, he relishes the bad behaviour of broken equipment; and he alludes to musical personalities as diverse as Pauline Oliveros (natch!), John Kirkpatrick (also natch), and Jasper Smith 1, whose singing was the foundation for the track ‘Down In The Meadow’. Evidently, the tributaries of avant-garde and folk musics flow freely into Sanderson’s palate fine and find a welcome meeting point under his enquiring fingertips. Most endearing of all is the phrase “staring at an astronomical chart to empty mind whilst working out a sound”, and if that isn’t a gorgeous insight into the creative process of this man, then I’ll sell my copy of Lot 74 by Derek Bailey. The close-up photos of the concertina on the cover are a further index to his intimate engagement with the minutiae of sound, the physicalities of the instrument, evidence of which abounds on the disc. Seems to me that Sanderson has quietly evolved his own personal take (very DIY, very modest, very English) on the whole electro-acoustic improv thing. From 7th October 2016.