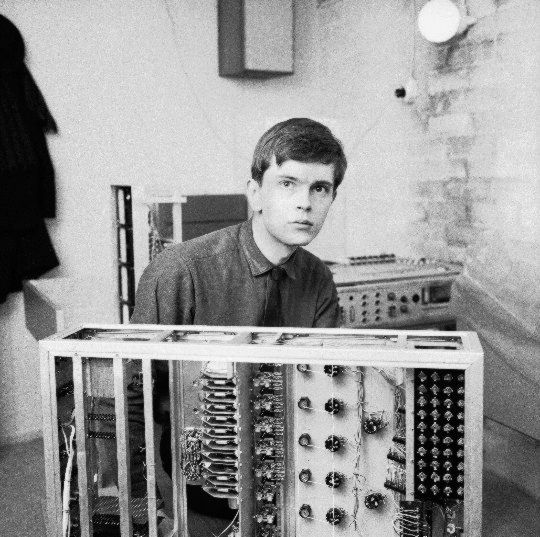 News of Finnish experimental / electronic music pioneer Erkki Kurenniemi’s death at the age of 75 years on 1 May 2017 was a shock to me: his actual output of music has been small compared to others of his generation but that’s due to the many interesting twists and turns his life took over the decades. The news prompted me to revisit a compilation of his early works that I’d reviewed years ago for TSP: “Aanityksia / Recordings (1963 – 1973)” released by Love Records (LXCD637) way back in 2002. The compilation contains nearly everything Kurenniemi made while employed as a volunteer assistant working towards a science degree in the Department of Musicology at the University of Helsinki.

Playing that compilation again, I’m amazed at the incredible of sounds Kurenniemi achieved and the cheerful fun and playfulness emanating from these tracks. From the loud and brash tape feedback noise of “On-Off” to the skritchy craziness of “Antropoidien tanssi”, to the mellow stateliness that becomes zanily deranged on “Inventio / Outventio”, to the near-hysterical wailing of “Preludi” or the equally demented “Nimeton” which builds up to a chaotic pyromanic climax, Kurenniemi’s curiosity and mischievous sense of humour power these tracks’ sounds and melodies to their utmost and reveal the sonic universe they inhabit as fun and at the same time extraordinarily rich in its minimalism. The last two tracks on the album (one “Mix Master Universe” done in collaboration with Jukka Ruohomaki) are long montages of various tape recordings with one track featuring a sing-along by Kurenniemi’s friends; these are not quite as enthralling as the earlier, shorter tracks, and they meander quite a bit but they still have their moments of easy amusement and joy.

Those interested in reading about Erkki Kurenniemi and why his career as an electronics music pioneer and inventor of electronic musical instruments faded away in the mid-1970s can start with his entry on Wikipedia which reveals that among other things he worked for now-defunct industrial design company Rosenlew and the more famous company Nokia designing industrial robotics systems during the 1980s. As interest in his early music and film work revived in Finland and around the world in the early 2000s, Kurenniemi returned to designing and making electronic musical instruments. He also became a commentator on future trends and developments in science and technology for Finnish TV networks. An interesting aside is that Kurenniemi’s mother Marjatta is famous in her own right as a writer with her own entry on Finnish-language Wikipedia.

Kurenniemi’s films (14 in all) and some of his early musical inventions and robot designs are being archived and preserved by art galleries and museums in Helsinki and Stockholm. His reputation in different fields of art, science and technology, and Finnish media is sure to grow after his death. Years may pass before his legacy to Finnish art, music and culture is fully recognised and acknowledged. RIP Erkki Kurenniemi.