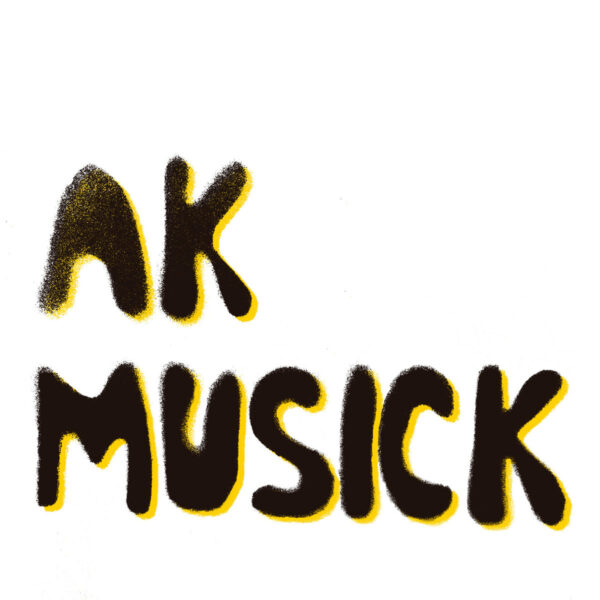 Another 1970s rarity is rescued and reissued by the Spanish label Mental Experience, who have been bringing us all manner of exotic oddities from the unknown corners of progressive rock history. AK Musick’s eponymous record (MENT008CD) was released in 1972 in a tiny hand-made edition of 150 copies and this is the first time it’s been reissued. The label try to sell it to us as a forgotten piece in the Krautrock jigsaw, but I think that’s a bit of a cheat – it’s really a record of very serious and rather intellectual free improvisation. Woodwind player Hans Kumpf of Stuttgart was the leader, and he banded together the four other players – Alfred Lell, Winifried Koch, Helmut Grab and Angela Weber, who all shared similar backgrounds, arriving at free improv from classical training and an interest in the music of contemporary composers. Not too far apart in fact from some of their fellow improvisers in the UK, although some of the English players were also interested in jazz. It might make more sense to assess AK Musick in the context of improvisation’s history, were it not such an oddity – you’ve only got to listen to it and you can sense it wasn’t really influenced by much else, nor did it create a great impact outside of its own closed circle. What I mean by that is that it’s so darned odd, and exhibits a rather ornery stubbornness. Hans Kumpf did not go on to have his genius recognised by Peter Brötzmann, for instance, and stands apart from the FMP continuum.

One of the features of this all-acoustic record is the fairly wide range of instrumentation played – woodwinds (oboe, clarinet, bassoon), cellos, lots of percussion, but also some more unusual instruments such as the zither, darbuka, Jew’s Harp, kazoo, and ektare. In this AK Musick bears some resemblances to Alan Sondheim’s early records, but only because Sondheim seemed determined to play everything he could get his hands on. The concern with AK Musick seems to have been to create a lot of unusual sounds on the record, rather than demonstrate the intensive exploration of an instrument’s potential, or a particular way of playing 1. Yet Kumpf and his crew don’t do much to exploit the combinations of sound; I was struck on today’s spin by how little group playing or interaction there is, and some of the tracks (for instance ‘Ron Do’) are mostly just one solo followed by another solo, threaded together in an illogical string of thought. You need to tune to ‘Impro-Vision’ if you want to hear some group playing, but even here – and it’s one of their best shots – the ensemble work lacks force, even though the band are going all-out to be “weird” and energetic with their whooping and swooping sounds. There’s also the disjointedness of ‘Schace’, a track frustratingly hard to hear (the whole thing has audio fidelity issues, which may be because it was recorded in such a hurry) as the ensemble lapse into subdued near-silent passages, then occasionally erupt into flurries of spiky percussive playing.

The last track ‘Baz’ starts to fulfil some of the promises made by this record, and there are flashes of true wildness and inventiveness in the playing and in the highly unusual sounds emerging from the band, and this 6-minute workout comes closest to delivering the press note guarantee of “radical, freaked-out sound”; the electronic organ, an instrument which is rarely heard used in this context, is particularly strong, with its constipated whine adding a vaguely cosmic vibe to the music. I still find it a rather frustrating listen though, and overall I sense that Kumpf’s crew did not completely succeed in loosening their classical shackles; the music feels like a control-freak’s idea of what free improvisation should be, with too many “ideas”, pre-programmed experiments, and not enough passion for real exploration. Each piece is slow to start, and then unsure what to do when it arrives.

The original record was released on Hans Kumpf’s own private press label AKM Records. It was the first release on his catalogue, which released only two other LPs: Free Blacks, in 1976, an album of clarinet duos where Kumpf teamed up with the American player Perry Robinson; and In Time, a 1977 record which has the distinction of being the first ever release by German clarinettist Theo Jörgensmann, a prolific player who is still active today. The other members of AK Musick didn’t fare quite as well; neither Koch or Lell have been heard from again, while organ player Helmut Grab went on to join Matter Of Taste, a German jazz-rock combo. Kumpf himself would later team up with members of the Ganelin Trio to make On A Baltic Trip for Leo Records in 1984. If you want an original copy of the 1972 AK Musick on vinyl, be prepared to shell out around 300-600 simoleons. From November 2016.