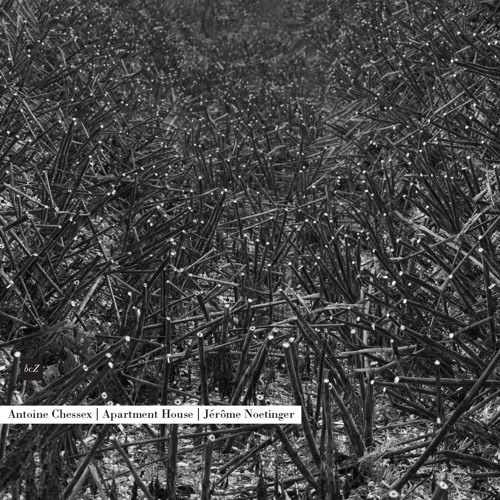 Swiss composer Antoine Chessex is no stranger to incorporating electronic elements into his orchestral scores, as evidence by his collaboration with Valerio Tricoli on Dust – which was the last thing we heard from Chessex in 2012. On it, Tricoli added tape music and electronic music to the performance of a string trio, and some near-horrifying desolate music resulted. On today’s offering, Plastic Concrete / Accumulation (BOCIAN RECORDS BC-AAJ), Chessex has turned in two more ultra-modernistic compositions for a chamber ensemble (Apartment House), and roped in the great Jérôme Noetinger for the tape/electronic elements…in overall approach this isn’t too far away from Dust, but the music is much more rich and fascinating. The press release throws out descriptions such as “textural density” and “microtonal tensions” to account for these eerie twisting layers of sound, which often generate rather alarming dissonances and mixed harmonies that the human ear finds hard to tolerate. The album won’t exactly make you feel ill, but it certainly won’t induce a sense of well-being either.

On the first piece, ‘Plastic Concrete’, the music is performed by a mix of violin, clarinet, trombone, cello, acoustic double bass and electric guitar, and Apartment House – said Ensemble led by Anton Lukoszevieze, the cellist – turn in an inhumanly perfect rendition of this complex scored work, while Noetinger operates his trusty reel-to-reel tape recorder to bring in some “real time manipulations”. One avowed aim of working this way is to inject unexpected surprises into the scored piece, and thus break down the barriers between improvised and composed music (something a lot of people seem very determined to achieve these days). All 24 minutes of ‘Plastic Concrete’ are full of inexplicable incident, for sure, but the general tone of the piece remains quite solemn and serious, even when the string section are creating some pretty wild and hairy swoops into the upper registers. The sounds combine very pleasingly. If we had some attack-mode percussion added to this set, one might almost say the bold visions of Edgard Varèse were coming true.

‘Plastic Concrete’ was recorded live at Cafe OTO in London in 2014. 14 months later, ‘Accumulation’ was recorded in the same venue, with a different line-up of Apartment House, effectively now a string quartet for the occasion. Superficially, ‘Accumulation’ may lack the variety of its brother without the extra colours of woodwinds and electric guitar, but it’s much more focussed, and the strings fuse together into a tight knot of sound, again almost impossibly perfect. This may be due to the precise execution which Lukoszevieze’s crew are capable of, or the watertight arrangements of Chessex (I don’t know why but I sense he’s a man who leaves nothing to chance), or the subtle sonic blending which I assume is taking place under the gifted fingers of Noetinger and his tape recorder. The overall effect is extremely satisfying to hear, and I think both pieces can be counted as successes. From 21st November 2016.