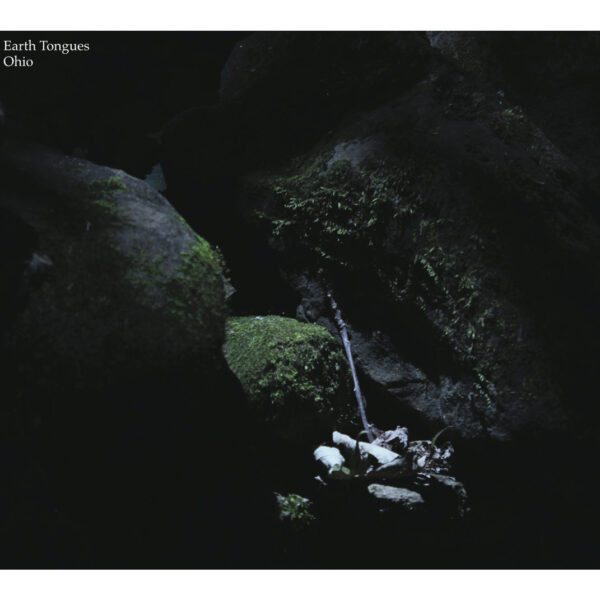 Last heard from Earth Tongues in 2016 with their mighty set Rune…here they are again on Neither/Nor Records with an even more extended double CD set called Ohio (n/n 006), recorded on a single day in July 2015, and 93 minutes pass like nothing when you sit down to let this slow-moving, ponderous ambient-improv engulf you. The trio here are once again Joe Moffett, with his trumpet and cassette machine, Dan Peck with his tuba, and the percussionist Carlo Costa. Their aim is to push themselves and the audience as far as possible down a route of endurance, of extended tones, lengthy explorations, and strange near-silent passages…

“Scope and scale” are their watchwords, as if they used to be fine art sculptors making monumental statues 18 feet high, and have now decided to think even bigger, carving out chunks of earth, chipping at the side of a mountain, or repurposing entire urban landscapes such as highway constructions into enormous works of art. “Dynamic and temporal extremes” are also guiding strategies, referring I suppose to the interplay of the musicians and the duration of the work, both elements worth considering…unlike the type of improvisation which is played at top speed, Earth Tongues make their best effort to retard their normal instincts and play everything at this painfully slow pace, as if they were frozen Neanderthals slowly thawing out and coming back to life…in so doing they don’t deny interplay with each other, but rather they emphatically call attention to it, placing it under the spotlight on a totally bare stage, where there’s no room to hide and no chance to allow fluffed notes or careless ideas.

Only the strong survive under these competitive, Darwinian rules, but it pays off when players as skilled and bold as these are involved. As to the “temporal extremes”, the listener also becomes painfully aware of each passing moment as they listen to this inexorably slow and minimal heaving music, yet it’s so compelling that the entire set seems to vanish past you in no time at all (see prior remark). That’s kind of disruptive, in a good way, of normal experience; I sense it’s something that some modernist composers would give their right hand to achieve, and they can only get close to it through expending bags of effort and intellectual ponderings, ending up with dense notation and abstruse compositions…where Earth Tongues can evidently do it through improvised performance alone (which isn’t to imply that it’s effortless).

The “stark” setting of this work also means that the players have nothing to conceal, no tricks up their sleeve, no cloaking “bad” playing behind a bank of effects pedals, and most of the unusual sounds are generated by purely acoustic means. I am not sure exactly what the cassette players are doing, but I think their role is minimal, and most of what you will hear is the low growls of Peck’s tuba, the astringent and severe shrieks from Moffett’s top register, and the metallic zings of Costa bowing his cymbals to produce acidic sensations in the listener’s mouth. A pared-down, no-nonsense world is what they delineate, almost primitive in its simplicity, but unfailingly direct and honest. A truly “epic” double album…from 7th November 2016.