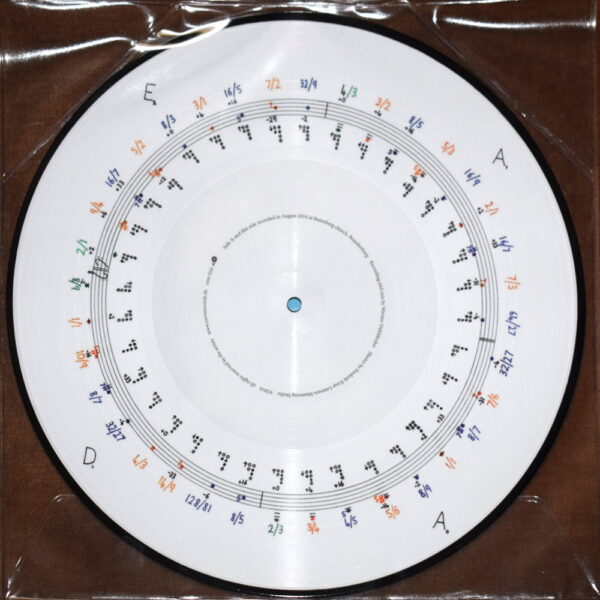 Don’t seem to have heard a record from Berlin tuba player Robin Hayward since 2010’s States Of Rushing on Choose Records, an LP whose memorable cover image spoke volumes about the steely precision of this ultra-minimal player who has done so much to chill the bones and cool the jets of many young hot-heads who cluster like flies around the Exploratorium. Hayward’s with us today credited with playing the “microtonal tuba” and joined by Christopher Williams, another Berlin player who carries the contrabass and once made a record with Derek Bailey in 2004. Together, the duo call themselves Reidemeister Move, and on Plays Borromean Rings (CORVO RECORDS core 010) they perform one of Hayward’s compositions. It can’t have escaped your notice that the score – a graphic score, at that – for the piece is printed directly on the record as a picture disk, thus forming a neat packaging of ideas and sound into a single cohesive unit. This sort of imaginative approach is one of the hallmarks of Corvo Records, I think, each release in their small but select catalogue exhibiting a successful marriage of visuals, sound, and packaging.

The graphic score for Borromean Rings is a very precisely-rendered string of information, as severe as computer code, and its sequence or logic is not plain to the untrained eye. Yet the intention behind Borromean Rings is not to create a ring-fenced barrier of inescapable rules, rather to free up the players in some way…the concise text printed within likens the composition to a game for two players, whose rules are intended to help each player “explore continually fresh avenues within the harmonic framework”. In trying to explain this kind of thing to myself, I usually reach for the metaphor of a map, one that’s intended to help the walker find their way around a strange clump of terrain. As for rules-yet-no-rules, I always understood (perhaps wrongly) that this was the essence of Cecil Taylor’s method, when directing his typically epic collaborative works of energy jazz.

Full marks for the concept and the method, then. But Reidemeister Move Plays Borromean Rings isn’t a very exciting listen. The lower-register drones are played with care and precision, but with zero passion; the even-ness of the work starts to grind down the listener in short order, much like a house painter who is skilled at applying a perfectly smooth layer of white paint throughout the house, slowly working in his methodical way. It’s not clear to me how the players are manoeuvring for position, if that’s what the game of Borromean Rings entails; I’m unable to perceive the intended avenues of exploration in what seems to me more like a series of slowly-executed turns on the exact same spot, like two animals circling in a maze. Much as I like the picture disc format, the music suffers from being pressed in vinyl this way, and the surface noise on my copy marred my appreciation of what I suppose is meant to be pristine, blemish-free minimalism.

On the positive side, the sound of these particular instruments is something I can enjoy for long stretches, and there is an unhurried pace to the playing that is evidence of the discipline and skill of both players, able to sustain long tones and extraordinarily precise fingering for long periods of time without once disturbing the chilled atmosphere. Werner Dafeldecker, of Polwechsel fame, did the recording in a church in Brandenburg. The label owner Wendelin Bücher designed the package, and even came up with a logo design for Reidemeister Move; it’s printed quite small, and it’s not quite in the same league as a Black Metal emblem, but it’s a nice touch. Numbered and limited to 300 copies; arrived 26th April 2016.