Massaging brains with his short ideas repeated is Italy’s Haxel Garbini, a new name to me, somewhat shadowy in both profile and in sound. The twelve process-based (de)constructions that make up URI find Garbini operating within a quasi-Minimalist frame: clipped phrases fed through effect-pedals ad infinitum. A faint whiff of cod-orientalism. Slender arrangements for distortion-driven dirge and highly nuanced composition both, with an enduring indifference to the possibility of reconciling such uncomplimentary approaches.

Typical of this pathology, ‘Estate 1984’ and its subsequent ‘Reprise’ have far less in common than good old chalk n’cheese: the former a swift, swampy elegy to forgotten toys, and its counterpart, a hypnotising harmony of reverberant organ tones that harken us towards a trance state. Neither blood relations, nor cosy bedfellows, such bi-polar antics are made acceptable only by the omnipresence of this unlikely pairing strategy: ‘Emergere/Fluttuare’ (to give another example) sees the sludgy, seabed stirring of a disgruntled cello beneath 100 atmospheres of pressure swiftly supplanted by the carefree play of pastoral folk guitar for a twittering avian audience. And so on.

While an escape route of sorts can be found in ‘Dobbiamo Scappare’, where Bruce Haack-like vocoder exhortations drift disembodied around a rudimentary bass pulse, for the most part listening to URI is rather like comparing photographs to their negatives. Garbini’s mixed bag of unresolved melodies, fidelities and koan, whose ongoing incompletion implies a contradictory appetite for new scenery and a cocoon-like resistance to new influences, provides many Gordian Knots for more literal-minded listeners to scratch heads over. 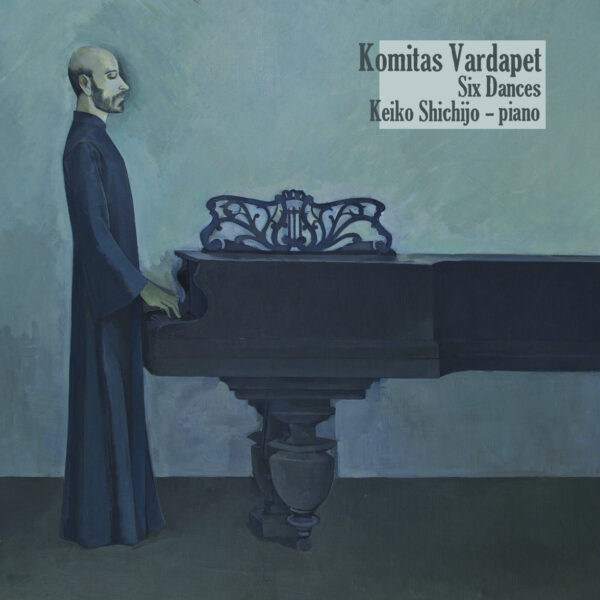 Pendulating between flights of filigree and fleeting respite are the fine-tuned fingers of pianist Keiko Shichijo, whose infatuation with the work of sacerdotal Armenian composer Komitas Vardapet recently saw her hidden talents scooped up by Amsterdam’s Makkum label. The clincher: a recital at the Geelvinck Hinlopen Huis, provides the contents of this EP, while the pieces were written during Vardapet’s spell in Paris in 1906, and played on a Steinway just 2.5 decades older. ‘Situation-struck’ Arnold De Boer of the Makkum label was straight away sold, and set about documenting the momentous occasion on 10” and CD formats.

Of Shichijo herself, little is noted, so she shares the obscurity of the object of her devotion, along with an enduring fascination with the music of times and places long gone. Ordained as a priest in his youth, Vardapet composed his early work in late 18th Century Armenia and later, with sponsorship, in Berlin, where he introduced Europeans to folk musics Armenian, Kurdish and Turkish, becoming in time an avowed ethnomusicologist. Though he composed this six-stage cycle for piano, it is informed by his musicological research, drawing themes from folk dances and sounds from instruments such as the dap, shvi, dhol and tar – local variations on instruments such as tambourine, reed pipe and hand drum.

Shichijo (re)animates this mythology with detail and finesse: in ‘Yerangi’ florid arabesques fade to absent-minded lapses that hold a light to the piano’s inner chambers. To her credit, she doesn’t over-egg her reading of instructions such as ‘delicately and majestically’, which Vardapet liberally applied to dances for men and women: the held notes of ‘Unabi’ are brushed lightly by brisk ornamentation; an ambivalent joyousness fueled by the player’s absorption into historical reverie. ‘Shoror’ – the swaying dance for ‘heroic men’ – maintains the majesty, but hangs a question mark on every sustained end-note.

Given the attention to detail, the brevity remains a mystery. ‘Shoror’ towers over at 6:34: enough time to house three other pieces, but probably not enough for a dance to get going. It’s more likely that the cycle was composed as a museum piece, patiently inlaid with the stories and sensibilities of its fading origins, but sufficiently adulterated for the curious listeners who might have been alienated by a direct encounter. Indeed, the days were numbered: Vardapet was arrested on the first day of the Armenian massacre in 1915, and though released with the help of the American ambassador, remained traumatised for the twenty years till his death in 1935. Gone, but thanks to Keiko Shichijo, not forgotten.