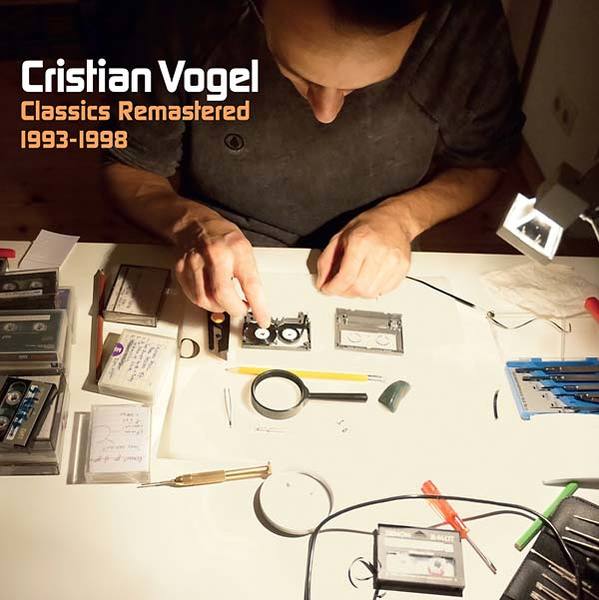 As the title suggests, here Cristian Vogel appears to have had a damn good clear out of his cupboards and happened upon a bunch of old DAT tapes. As anyone with even a passing interest in home recording in the 1980s and 90s will know, DAT was the industry standard mastering format, although like all tape-based formats its stability over time is questionable and in order to avoid any and all kinds of tape rot, should have been archived digitally at the earliest convenience. These tracks are crowdfunded remasters of music originally recorded in the 1990s while Vogel was resident in Brighton, UK. That’s my neck of the woods. I recall he used to have a studio space in the Levellers’ Metway complex in KempTown. I had friends who lived in that area for a while during this period and Vogel could sometimes be spotted in the boozer halfway up Sutherland Road.

In the 90s you could have said that Cristian Vogel was the Aphex Twin for people who didn’t like Aphex Twin. Their music shares attitudes of crisp production, love of techno and a feeling of general unease, but Vogel was a lot more single-minded in pursuing accessibility as opposed to notoriety and as result, his music is a lot more, well…welcoming. I do recall that aside from his and Neil Landstrumm’s own Acid Box club night (which quickly forged links in other cities in England and Scotland and further afield), Vogel was never what you might call “visible” on the local scene, unlike DJ-ing peers and men-about-town, Magnus Asberg or Darius Akashic. At the same time promoters in other parts of the world were referring to Vogel and others with the term “Brighton Techno”. Perhaps as Vogel intended, Classics Remastered sent me on a bit of a nostalgia trip. When the bass comes in on “Alien Conversation” I’m transported back to a field at night in the middle of somewhere rural in 1993. I can smell the wet spring air, someone’s car abandoned on a green verge with countless others over half a mile away, those bass bins over there are easily as big as my front room, searchlights and laser arrays strafe the clouds and there’s either a hundred people dancing in my immediate vicinity or none at all, and ever so gradually: the beautiful blue haze of dawn.

Reference is made to Vogel’s creative partnership Jamie Liddell, Super_Collider with the inclusion of the angular Don’t Take More Jamie Liddell Remix on the second disc. This demonstrates the overlap of projects; Super_Collider’s first 12”, Darn Cold Way Of Lovin’, came out in 1997. Of course, by then its three years since the Criminal Justice And Public Order Act of 1994 came into effect essentially transplanting techno from its natural habitat – the countryside – into city centre clubs. The free party scene continues to this day of course, but always under the shadow of potential prosecution under that draconian Act.

While sometimes on this compilation, Vogel’s work could court novelty – the wonkiness of “In” for example – other pieces represent the vogue for “washing-machine techno” like “Plastered Cracks”, or the dystopian murk of “General Arrepientase”. There are also steps away from the typical techno tropes; for example, “Gigantic Tautological Machinery” and the almost-ambient “You And I” are full of rhythmic tricks and contain unusual combinations of samples and synthesis demonstrating a development; a progression away from catering only for the needs of the typical weekender. As the iron fist of commerce closed around the dance music scene, resulting in the multi-million pound industry that exists today, it’s hard to imagine a time when a budding global scene was simultaneously localised and easily accessible. Classics Remastered goes some way to jog the memory.