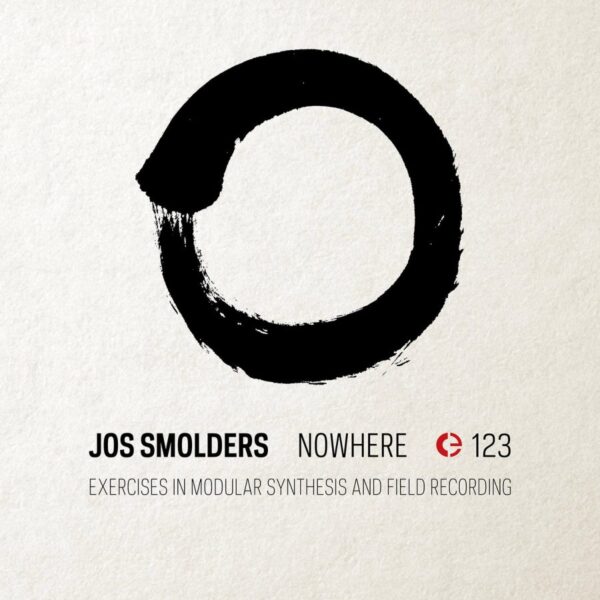 We haven’t heard a great deal from Jos Smolders, the Dutch musician who began his career studying architecture, outside of his contributions to a compilation of sorts called International Musique Concrète Assembly where he appeared with fellow Netherlandish droner Frans de Waard. But that was in 2007. It would have been nice to have heard some of his 1980s releases on Midas, or his 1990s records for Korm Plastics, but I’m missing these parts in my education. More recently, he’s been conducting a series of experiments called Modular Works, some of which were released online in 2014 and 2015. I’m assuming today’s record, called simply Nowhere (CRÓNICA 123-2017), is more or less in that same area, basing my guess on the subtitle “Exercises In Modular Synthesis and Field Recording”, plus the record’s inner gatefold which shows foreboding images of modular synths with knobs, patches and cables a-plenty, a sight which presents a challenging barrier to the ignorant novice.

Smolders used to be a self-confessed control freak in terms of editing his work. For Nowhere, he’s been trying to cultivate a more spontaneous technique for the production of electronic music. He’s basing it on Zen; he tells the story of how a traditional Zen calligrapher works, describing the process as 99% preparation. The artist must spend a long time getting into a deep state of concentration, and then create the artwork in a matter of seconds. I have heard this applied to painting and poetry as well as calligraphy. I’ve also heard it applied to project management, but that’s a dull topic which has no place here today. With Smolders, this means that he thinks long and hard about which patch to connect and how to set the parameters, before he even starts the session. When the sound / music is underway, he goes with the flow and only “interferes when necessary”, a phrase which may refer to purely technical considerations. When the work is completed, overdubs and editing are not eliminated altogether, but he forces himself to forego his usual extensive re-working method.

I’m all in favour of artists lifting themselves out of the rut of familiarity and using whatever means are necessary to get their brain to that point where they short-circuit their own comfort zone. Taking all the above into account, you might expect Nowhere to present a wild and chaotic spread of crazy electric noise, but in fact it’s a strong example of restraint and understatement. There’s much to enjoy and appreciate in these quiet tones, crackles, percussive pops and ambiguous whirrs, and the music sometimes develops into pleasing nocturnal drone-scapes, as it does on the fourth track which is a tribute to Maya Deren (who made visionary sleep-walking dreamy films with the help of her husband). Some of the pieces are quite lengthy, and they take a long time before they get to the point of their long and drawn-out statements, but the journey is more interesting than the destination and I can see the value of working out all the stopping-points in longhand. For the most part, Jos Smolders succeeds in transcending the workings of his machines, creating something more than mere process music. From 21st November 2016.