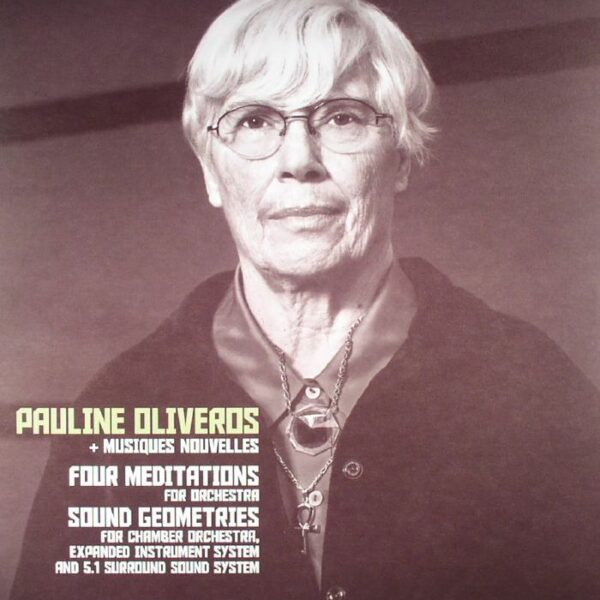 Pauline Oliveros, everyone’s favourite exponent of Deep Listening, sadly passed this year. As well as a respectable complement of original compositions, she also indulged in collaborations with diverse artists including John Tilbury, Nels Cline, Zeena Parkins, Francisco López, Eleh and Reynols. This recording was made in 2003 at Studio Dada, utilising the Oliveros-designed Expanded Instrument System (EIS) whereby Oliveros was surrounded by the Belgian orchestra Musiques Nouvelles. conducted by Jean-Paul Dessy, a Belgian composer and cellist. Previous releases have featured music composed by Philip Glass, Luciano Berio, Arnold Schoenberg, among others, plus a couple of collaborations with DJ Olive.

The first of the two pieces, “Four Meditations”, features the verbal contribution of an artist by the name of Ione. The terms vocalisation or sound-making or glossolalia might give you a more accurate picture of what she does. Although just as I wrote that during my first listen she suddenly came out with “Scorpions in your pockets, sand at your feet, sun on your neck, listen….oooh, lemonade…” which is unexpected if you take into account what the sub rosa press release maintains: “Meditation asks the performers to listen then sound. Listen means to include all that is sounding and to find a space for each sound that is made.” Given that this direction is intended to produce a completely different result every time “Four Meditations” is performed – with further unpredictability based on who performs it – Musique Nouvelles make a strident, scattergun attempt on this recording which makes me intrigued how they might perform it on a different occasion.

Their rendering of “Sound Geometries”, or to give it its full title, “Sound Geometries For Chamber Orchestra, Expanded Instrument System and 5.1 Surround Sound”, by contrast, is suspenseful; full of anxiety with every detail rich and exciting. At 6:30 I mistake Jean-Michel Charlier’s clarinet for a malfunctioning smoke alarm (in the nicest possible way). A selection of microphones record the players, “…processed in one of ten geometrical patterns by the …EIS…to transform and move the players’ sounds in space in the 5.1 surround system.” Regrettably, as is the case with all attempts at multi-channel composition, this being a stereo cd the full effect is somewhat lost. This in no way affects my enjoyment of the piece, however. No reference is made to Oliveros’ actual score for this piece; whether it is made up of specifics or indications, encouragements. But at its core is a sense of freedom: these players may or may not be natural improvisers but their interactions here are among the strongest I’ve heard lately. And a great manic ending. Just my cup of tea.