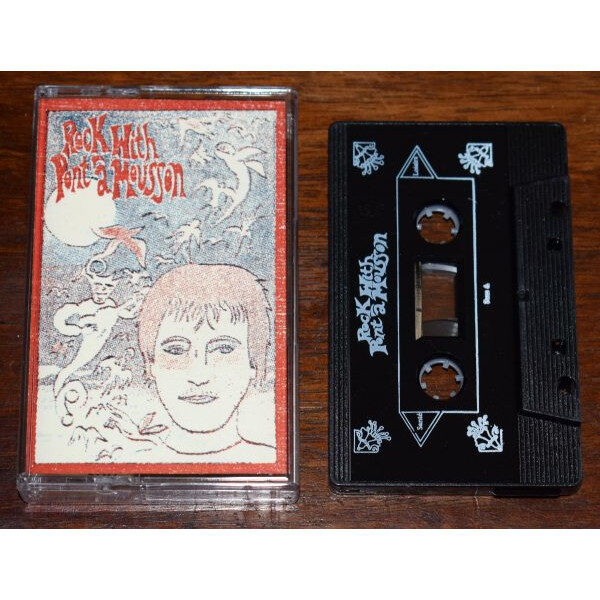 Pont à Mousson sings 13 wistful songs of love, loss and self-doubt on Rock With Pont à Mousson (SL07). His forte is introverted, self-regarding songs, tinged with longing and regret; when he attempts more upbeat rock or pop songs, the results are rather weedy. There’s a certain charm in his relaxed, conversational style of singing which does connect with the listener, but he’s not a particularly strong vocalist. I like the brevity of the songs though, and the spare arrangements – guitar, piano, drum machine – do smack of honesty and economy. The cover art is drawn by Nicolas Guine, showing Pont à Mousson surrounded by flying devils who are not especially threatening.

Hablemos del Alma has just four songs on his self-titled cassette (SL06). This is the solo turn of Angelo Santa Cruz from Chile, and it’s performed with synths, twangy guitars, drum machines, and low-key vocals, adding up to a personal take on the synth-pop genre (though not quite unsettling enough to be labelled Cold-Wave or Dark-Wave or whatever the term is). Weirdly, he describes his creations as “New Age” music, a connection which I don’t get at all. At least there’s a smidgen more tension in his songs than the wispy Pont à Mousson, and there’s a certain opacity about his motives I like. Only once or twice does he lapse into rather tasteful chords that transform him into a DIY cabaret singer. He does it with old-school synths, ARPs, organs, and Diana Menino, Micaela Skoknic and Manu Guevara assisted with the vocals.

Final item is a real oddity by McCloud Zicmuse, a vagabond musician who we encountered a couple years ago with his Version D’un Ouvrage Traduit album on a record credited to Le Ton Mite. Today’s cassette, Het Slechtgetemperde Klavier en Zwakke Blokfluiten (SL08), is performed using harpsichords, flutes and recorders, striving hard to project a medieval, renaissance or Baroque period feel. In the end it delivers the sensations of a lost European movie soundtrack, with its very short cues (most of the tracks are under a minute in length) and vaguely “historical” atmosphere; you can practically see the wenches, knights and jesters cavorting in front of an old castle photographed in Eastmancolour. This might not quite be the whimsical pastiche I’m making it out to be, and there’s a certain strange mystique lurking behind these elliptical, half-finished musical statements; and Zicmuse performs everything with strength and conviction. At 23 tracks it may seem to be stretching a single idea a little too far, but the album is brief overall. Recorded in London and Belgium.