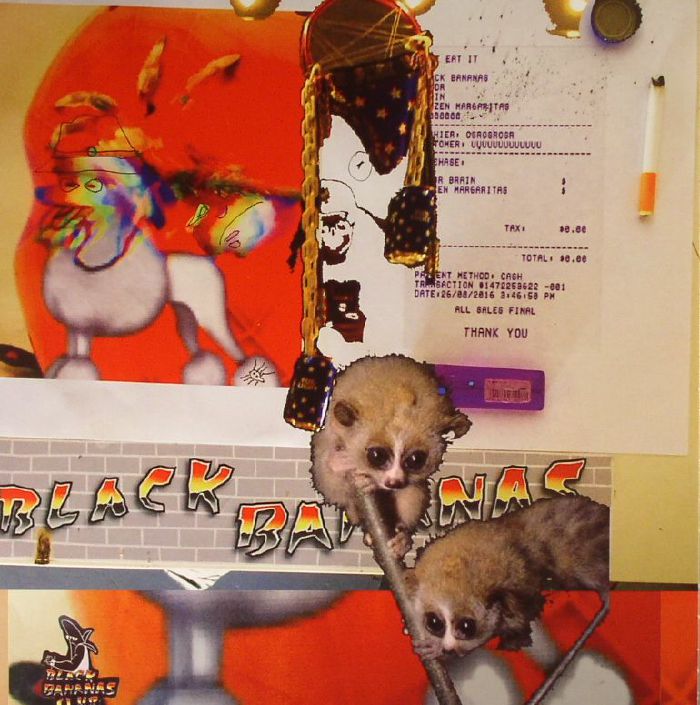 Great single by Black Bananas, a US combo which amazingly features Jennifer Herrema, the singer from Royal Trux. Ever since everyone’s favourite junkie band broke up around 2001, it seems RTX emerged like a phoenix from the ashes, and Jennifer’s been yawping in that combo since around 2004 producing 3 albums for Drag City. Also in RTX is Brian McKinley of Marsona, and Black Bananas may be a sort of spin-off project or alter-ego. At any rate since they joined forces with Nadav Eisenman and Kurt Midness, they’re produced Rad Times Xpress IV and Electric Brick Wall for Drag City, both of which look like sizzling platters worthy of scoffage. Spydr Brain (OSR TAPES OSR 76) is their first (and probably only, since the label’s future looks doubtful just now) single for OSR Tapes in Brooklyn, coupled with Frozen Margaritas; it’s an excessive, distorted take on the Funkadelic sound, fed through the mincing machine of white urban angst, powered with an insane groove and plenty of hyper-splash colourful studio effects drenching every move. Jennifer’s vocals sound particularly wasted as she romps her way through this sleazy psychedelic nightmare with a five-pound slab of assurance and two buckets of sheer snarkey attitude under her arm. The A-side’s the real trouper, but the B-side while slower is cut from the same funky cloth and could be used to manufacture 18 pairs of insanely flared disco trousers…now I want to investigate back catalogue of these delirium-merchants, purely on strength of this slice of dementia. Totally bonkers cover art too. From 21st December 2016.