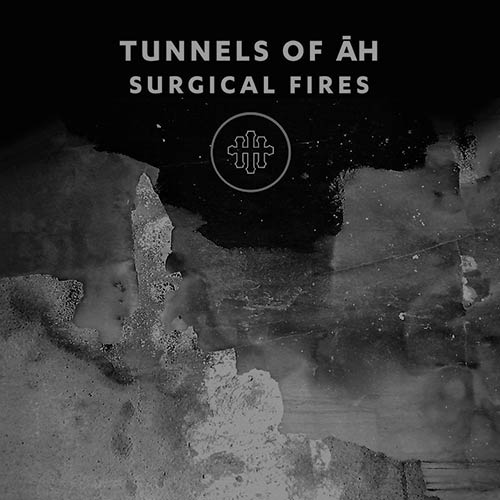 Another “horror-noise” special from Cold Spring Records, the UK label which does house a number of extreme and monstrous items in its catalogue…the album Surgical Fires (COLD SPRING RECORDS CSR226CD) was created by Tunnels of Ah, and it’s his third release for the label since 2013’s Lost Corridor. Tunnels is a solo project by Stephen R. Burroughs, who was one of the main men in Head Of David – one of my favourite 1980s indie noise-combos who created an almighty obnoxious racket with their guitars and shriekery for the Blast First label, and as such endeared themselves to many disaffected types.

I had no idea Burroughs was pursuing a solo line. On the evidence of this, it involves an intense form of electronic music with plenty of weird processing, nasty effects, vocals buried in a swampy mix…it moves beyond mere dark ambient drone music somehow, perhaps through his close attention to dynamics and studied application of nuanced tones to his ever-shifting howls and murmurs. Needless to remark there’s a highly unpleasant subtext to Surgical Fires, as evidenced in titles like ‘Demonic Forms’, ‘Mind As Corpse Bearer’, ‘Black Air (Exhale)’ and ‘Release of the Burning Mouths’. These do much to trigger the unhealthy imaginative forces of a susceptible listener, and it isn’t long before we’re all sharing alarming visions of a subterranean Hell, not unlike a coal mine, laced with poisonous vapours…death is all around us, and there’s a supernatural dimension to boot, if the “Lordly Cobras” alluded to on track 7 are the demonic entities I suspect them to be.

The record, half-music and half sound effects, does nothing to dispel such tormented visions – nor does the cover art, also by Burroughs, which seems to be applying a decalcomania effect to suggest grim, grey, gruesome caverns of inescapable doom. The printed press release takes us off another tack, alluding to “psychic surgery” (whatever that may mean; in this instance, it probably involves taking slices out of a man’s soul with an invisible scalpel) and a roster of important-sounding abstractions, such as “loss, gain, conflict, resolution, decay and transformation”. I have no idea if these words belong to Burroughs or to the Cold Spring PR department, but they just make the work seem unnecessarily solemn and self-important…it reads more like the agenda of a two-day international symposium on 21st-century urban problems. Nonetheless, the record remains an assured piece of depressing gloomoid filth…from 30th November 2016.